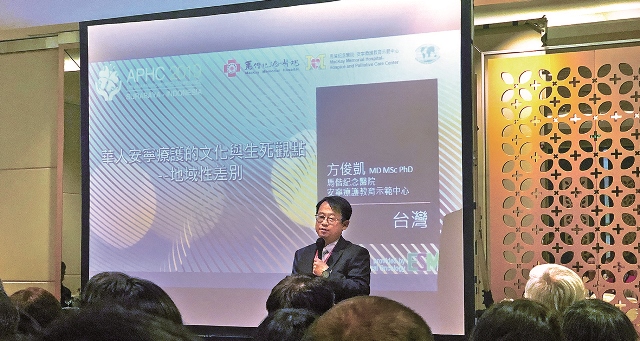 However, after participating in APHC, he unexpectedly found that in countries where medical care is less advanced, the proportion of children's palliative care cases is quite high. "This is because better children's medical care leads to lower demand for children’s palliative care. In addition, the medical team usually takes
active treatments believing that children are still young and there’s always hope."

From this, Fang Junkai began to wonder: "In our palliative care, we tend to estimate the time of intervention in relation to the last stage of the patient’s illness. But how much sooner is the best time for us to intervene?" At this APHC conference, some other countries shared a refreshing view regarding when palliative care should begin, for instance, whether starting at the diagnosis of cancer or at the cancer screening.

"Nowadays, people diagnosed with cancer just live out the typical five years while expecting the cancer to recur. They don't work, they don't do anything, but live a handicapped lifestyle awaiting death. How many people’s lives could have been enriched in those five years?” Fang Junkai believes that if intervention occurs too late in the process, especially when the survival rates of cancer patients are improving, it is actually equivalent to creating more people with physical and mental disabilities. With a smile, he ponders, "So, are the doctors really benefiting or afflicting the patients?"

In his research, Fang Junkai found that cancer patients who work are less prone to have dementia compared to cancer patients who do not work. As such, he believes palliative care should be introduced earlier for cancer patients. Along with the treatment, the patient can maintain the ability to work and also retain the value

of life. He affirms, "The title cancer fighter sounds very powerful, but we should let the patients understand that they are not just cancer fighters, but they are still human beings with important roles to play in life."

As one of the members of APHN council, Fang Junkai feels strongly whenever he participates in the annual APHC. He says, "In the field of palliative care, Taiwan is not inferior to the international community. The only disadvantage is that we are not an English-speaking country."

He points out that even if Taiwan is devoted to palliative care, it is difficult to be exposed internationally: Foreigners may realize that we have great palliative care in Taiwan. However, they have relatively limited understanding of what we are doing because the papers we publish and the policies we launch are all in
Mandarin. Not only are these hard to understand in English-speaking countries, but these are also difficult to be useful in teaching."

Considering the weakness of the language in research, Fang Junkai believes that Taiwan should strengthen its language ability, while continuing to record the clinical experiences and publicize the results. "It is important that our goal includes allowing others to understand what we’ve done well in palliative care."