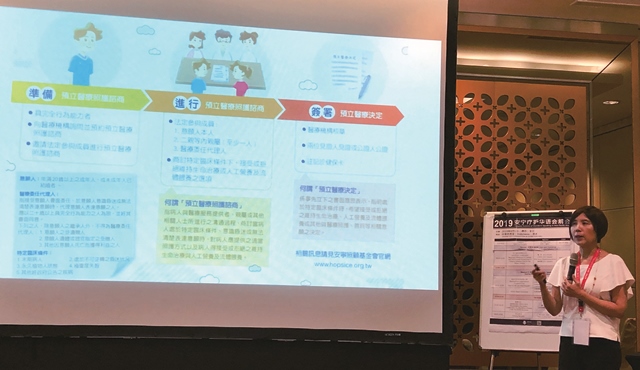 As palliative care continues to advance internationally, Cheng Yuyi, the attending physician of the Family Medicine Department at National Taiwan University Hospital, talks about the advantages of Taiwan's palliative care. He states, "Taiwan's palliative care is legally supported by the government, so we have no obstacles to hinder its development. In terms of drugs, many painkillers have been introduced in recent years allowing doctors to have more choices. As for others, whether it is hospitalized palliative care, home care, or combined hospital-home care, it is quite thorough in Taiwan. In conclusion, palliative care in Taiwan can be said to be truly complete."

For more than 10 years, Taiwan has implemented cancer control plans in accordance with the World Health Organization (WHO) regulations. It is hoped that patients will receive good and consistent treatment from cancer prevention and treatment to terminal-stage care. Adopting WHO's cancer control strategy has really allowed palliative care to bloom throughout Taiwan. For instance, more than 200 hospitals in Taiwan have signed relevant contracts with the Health Promotion Administration to integrate palliative care into regular cancer treatment.

"The National Taiwan University Hospital is required to have palliative care staff involved in at least 70% of all cancer patients’ cases," Cheng Shaoyi says. This regulation to implement palliative care on cancer patients allows them to receive higher quality of care if they should face the last stages of life.

In addition, the ACP has been the highlight of this year's conference. With Taiwan being the first country in the Asia-Pacific region to implement the Patient Autonomy Law, many countries naturally have high expectations on Taiwan and are paying particular attention to Taiwan’s developments. Currently, Taiwan is working with five other Asia-Pacific countries to develop the Asia-Pacific ACP Guidelines using family as the core concept. "Compared to countries such as South Korea, Indonesia, Japan, Hong Kong and Singapore, it is still only a vision, but we have already begun to draft the content of the declaration," says Cheng Shaoyi.

The Well Established Palliative Care Contributed by the First-Line Personnel

The success of Taiwan's palliative care development has largely been due to the improvement of policies and hardware equipment. However, Cheng Shaoyi, who has been devoted to palliative care for many years, stresses that the major contribution was made by the staff members of the palliative care facilities.

Cheng Shaoyi expresses the difficulties for outsiders to imagine that palliative care is often not a calm scene like those in the movies, but contains a variety of different challenges. "Palliative care is really a tough job. Many patients suffer from wounds and suppuration, and there may be a heavy odor in the air. Sometimes, a staff can take up to one hour just to clean up the wound."

She still remembers a patient with oral cancer, who stood at the door and whose sickly smell had spread throughout the ward. "Our caregiver spent several hours helping him clean the wound, apply essential oil, and finally restore the fresh scent back into the room. The patient was also able to rest comfortably."

Taiwan’s strength in palliative care is its dedication and loving care. However, even though the performance of Taiwan's palliative care already stands out among countries in the Asia-Pacific region, Cheng Shaoyi believes that more introspection is needed in many aspects in Taiwan.

Taiwan Hospice and Palliative Medical Regulations became effective starting in 2000. In 2009, eight major non-cancer illnesses were included in palliative care, which is the first in Asia; most countries around the world have not even progressed to include non-cancer illnesses. Despite this, the number of referrals from non-cancer patients to palliative care in Taiwan is still limited "because there are difficulties," according to Cheng Shaoyi.

Cheng Shaoyi explains that the development of non-cancer illnesses is not as clear as cancer which can be differentiated into stages. Therefore, it is difficult for doctors to determine whether the patients have met the necessity for palliative care. For example, many bedridden patients with advanced dementia may need hospice intervention; however, the actual number of cases accepted to palliative care is very low. The same goes for patients with heart failure, cirrhosis, and etc., where boundaries between stages are vague, resulting in many patients who pass away before they could be transferred to palliative care facilities.

Another group of patients, who are late to enter hospice care, is the children. Therefore, this year's APHC Conference featured a series of lectures on the theme Children's Palliative Care. According to Cheng Shaoyi, the reason why children's palliative care has not taken root is "because it is very difficult to achieve.” His analysis shows that children’s palliative care is not the same as adults’, and thus, “The same method cannot be applied to the children, for example, it is not easy for children to express their pain. We still need to work hard to break through in Taiwan."