Let's Sit Down and Talk Lectures on Life in the Neighborhood 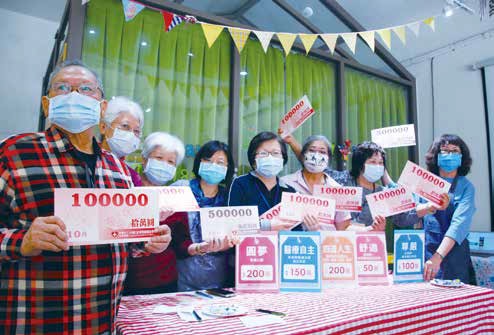 In the Hospice Foundation of Taiwan's lectures, a few paper cards and large prop banknotes aroused the senior citizens’interest in playing a game. They then focused on the topic of the Patient Autonomy Law and began to consider obtaining advanced medical decisions regarding medical autonomy, reluctance to be a burden to the family, dignity, and etc., which could not actually be purchased in the game.

On a warm March day, a small shop in an alley in Shulin brewed the smell of strong coffee into the neighborhood. The bright yellow retro British telephone booth at the entrance attracted passers-by to stop and take pictures. Walking through the door revealed a tent, with exquisite camping lamps and camping tableware; outside the tent hung exquisite camping lights. The scene seemed to be moving people to the green mountains in an instant, making them want to sit on the ground and have a picnic.

This hipster coffee shop is the long-term respite care center of the Nursing Home in the Neighborhood program in Shulin; it is also a good place for local elderly to meet. A lecture was being held that day, and the speaker was Lin Yi-Yin, the CEO of the Hospice Foundation of Taiwan. She divided the elderly into two groups with each group given a huge NT10 million game banknote. The commodities available to be purchased included Medical Autonomy for 2.5 million, Spiritual Peace for 2 million, Not Being the Family’s Burden for 3.5 million, and etc. Each item was important and it was difficult to make a choice. The 10 million in the hands of the elderly was not enough to buy every item; still, they happily arranged the order of their needs and seriously took notes for future reference.

Incorporating the life and death issues (which most people in Taiwan tend to avoid talking about) into the game played in a relaxed and cozy atmosphere is a method adopted by the Hospice Foundation of Taiwan after its accumulation of experience from many previous lectures.

After the Patient Autonomy Law was officially launched in 2019, all people needed to do was complete the Advanced Care Planning (ACP) consultation forms and sign the Advanced Decision (AD). With the exception of terminal patients, those who are in an irreversible coma or a permanent vegetative state, with severe dementia or other diseases as permitted by the government, have the right to choose to refuse medical interventions such as life-sustaining treatment, artificial nutrition and fluid feeding, and to say goodbye with dignity in the way they want. The Patient Autonomy Law can also enable medical personnel to have a clear basis when performing the medical treatment on patients with full legal protection.

However, the general public at large is still unfamiliar with the content of the Patient Autonomy Law and do not know where to sign AD. In view of this, the Hospice Foundation of Taiwan decided to enter the neighborhoods of the community and launch publicity lectures to let more people understand the spirit of advanced medical care and discuss with relatives and friends how to "say goodbye" with a healthy attitude.

"The topic of today's lecture is The Patient Autonomy Law. The law is difficult to talk about and hence accept. To make the elderly listen to it more attentively, we came up with the bidding game, which uses concrete props to lead the elderly to measure what choices must be made at the end of life to achieve the good death they want," Lin Yi-Yin said.

To make the game lively and interesting, paper cards and prop banknotes are not only eye-catching and easy to carry, but can also be passed out in different amounts as needed based on the number of people in the venue. The simple and easy-tounderstand paper cards with the prices guide the elderly to consider the importance of medical autonomy.

Education with Fun Experience the Spirit of the Patient Autonomy Law

Although many lectures have been received well, not every lecture has gone so smoothly. Lin Yi-Yin recalled a time when she went to a rural area in Nantou to hold a lecture at a community care center. Among the elderly who attended, there was a particular couple. The husband kept interrupting the lecture, while the wife kept shaking her feet restlessly. At first, Lin Yi-Yin was worried that the wife was not feeling well, but the staff said she was OK. After the lecture, she asked the staff at the center about it, and found out that the wife was very afraid of discussing life and death issues and that she had been forced by her dominating husband to come.

"If I had known about her fears and worries beforehand, I would have talked about the topic in a different way." However, this experience can also help the frontline staff to understand that "even in this age of advanced information, there are still people who can be so afraid when listening to this topic that they don't want to touch upon this topic emotionally," Lin Yi-Yin said.

After accumulating extensive experience from many lectures, the Hospice Foundation of Taiwan gradually adjusted the content of lectures. For example, using games to start the topic so that the elderly grow interested in playing the game and can better focus on the topics when the slides are presented in the second half of the lecture. The result has been more success in helping them think about whether they could obtain key items, such as medical autonomy, reluctance to be a burden to the family, or even dignity through advanced medical decisions.

In the past, the Hospice Foundation of Taiwan had played board games as an introduction to the lectures, but colleagues noticed that some elderly were very introverted and could not assimilate into it, which led to poor results. Therefore, a fun bidding game was created to replace the board games so that the importance of advanced medical care could be better understood.

Help You Overcome the Fear of Death

In the lecture that day, the 70-year-old Mei-Chun participated in an event organized by the Hospice Foundation of Taiwan for the first time. She had always seen death as a taboo topic. Even though her daughter, who was a nurse, told her about the Patient Autonomy Law, she still resisted to understanding it. That day was the first time MeiChun had heard about it from someone other than her own daughter. Through a simple game, she deeply realized that leaving with dignity and not becoming a burden to her family was what she wanted most. In addition, the scope of medicine is wide, and it is necessary to consult with professional medical personnel and understand the meaning of the Patient Autonomy Law to ensure that when the last moment comes, a person can say goodbye in the preferred way.

Completely different from Meichun was Deng-Feng, who was very concerned about issues such as hospice and palliative care and medical autonomy. DengFeng’s husband spent his last stage of life in a hospice ward, which provided the elegance, completeness, and dignity she pursued. So after the Patient Autonomy Law was officially passed, she immediately made an appointment for consultation and signed AD while accompanied by her daughter, who served as a witness. Her daughter, who was only in her 30s, also signed AD the same day after she grasped the importance of advanced medical care.

Shan-Bi, who had suffered from a serious car accident and ALS (Amyotrophic Lateral Sclerosis) in her life, already faced the dramatic change in life calmly because her family's concept of hospice and palliative care was established early. In addition, her grandmother, who was suffering terminal cancer in 1962, said goodbye to her family gracefully under a hospice treatment. After many years, when the medicine was no longer effective, her father also decided not to use invasive first aid, but to let life reach its end naturally.

Draw a Perfect Period for the End of Life

The Hospice Foundation of Taiwan has always been actively involved with the public. Besides regularly inviting celebrities to shoot public service advertisements and launch online promotional videos, it also hopes to listen to the voices of the people in a direct approach, such as providing online promotional videos, illustration books with pictures and texts, books, two annual newsletters, entertaining board game teaching aids, and DVDs. By means of a variety of promotional materials, the Hospice Foundation of Taiwan closes the distance with the public.

Lin Yi-Yin said that after each lecture, she would collect feedback from the elderly as a motivation for improvement of the foundation. Faced with elderly from different backgrounds, each of whom has a different understanding of life and death, the Hospice Foundation of Taiwan’s responsibility is to spread the concept through various channels. As long as time permits, she prefers to have case discussions with the audience, because she believes "only by solving the problems in the mind can the concept be brought into the heart."