The Ideal Promoter of Life Education 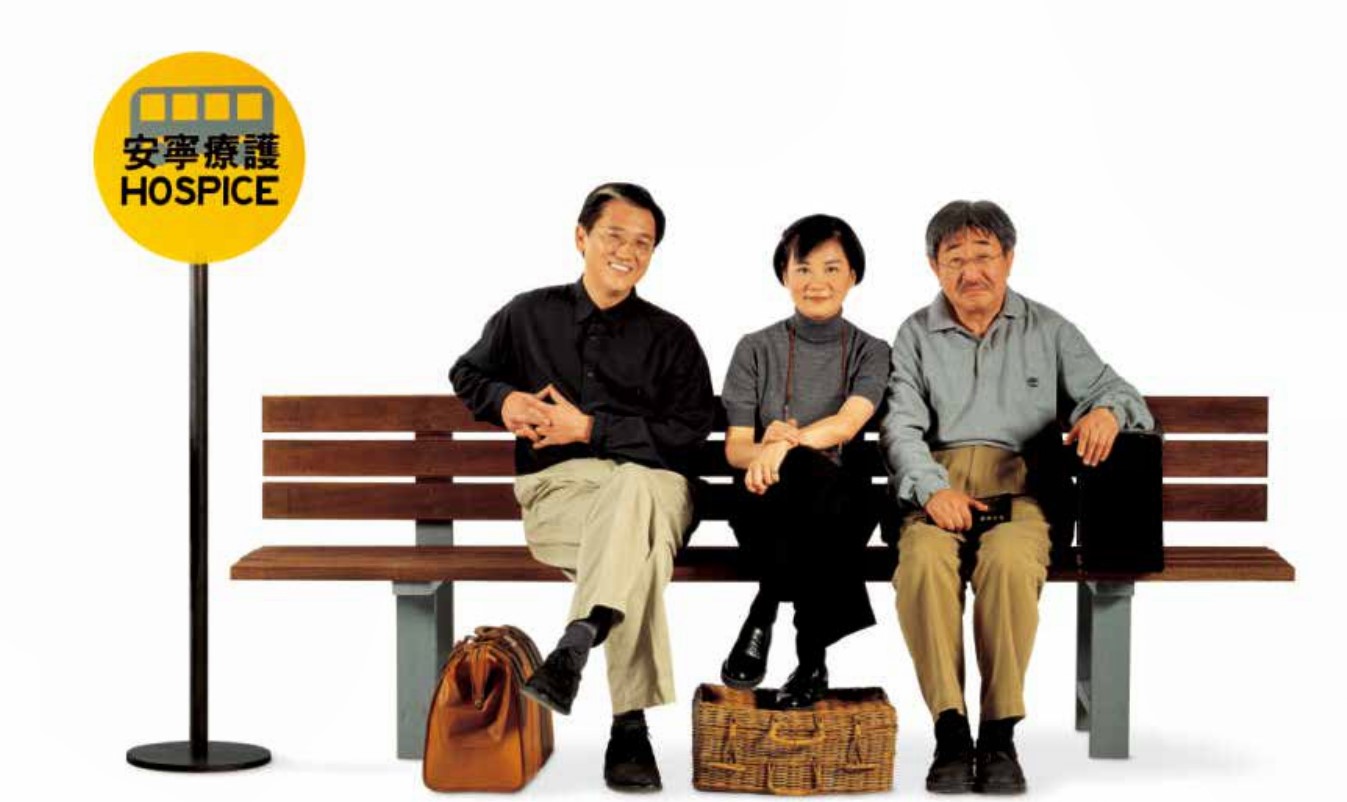 A bus hurries past. On the bench in front of the bus stop sign sits the late entertainer Tao Da-Wei, holding his luggage with one hand. He says to the variety show star Zhang Xiao-Yan, "What book are you reading?" Zhang Xiao-Yan replies, "Hospice, it means rest." Uncle Sun-Yue, another late entertainer, who is reading the newspaper, also joins the chat. This scene clearly conveys the concept that hospice care is a rest stop for terminal patients before their next journey beyond this life and that of "quality life and peace of mind and body."

"This impressive promotional video called Life Station intends to tell the audience what hospice and palliative care is really about," says Wang Nian-Ci, who has many years of experience in the field of public service advertising. As Director of the Hospice Foundation, she acknowledges that the concept of hospice care cannot be explained in a mere few words. Since the Hospice Foundation was established in 1990, in addition to life and death education, it has also actively promoted legislation related to hospice and palliative care. It hopes to ensure that everyone can maintain dignity at the last moment of their lives. After rigorous market research and years of solid promotional lectures, the Life Station promotional video was officially launched in 1998.

The Hospice Foundation's first spokesperson was Sun Yue. Sun Yue attended a speech made by Chao Co-Shi, Taiwan's mother of hospice and palliative care, and became interested in the topic of hospice and palliative care and end-of-life care. In the early days of the Foundation, Sun Yue not only served as a director, but also successively filmed Four Seasons of Life, Best Season of Life, Music of Life, and other 20-minute-long promotional videos. Sun Yue used vivid analogies, such as seasons, food, or music to describe the journey that life must go on. This series of short films accompany the Hospice Foundation to travel all over Taiwan, complementing its various lectures. For the newly born Foundation, it was the best self-introduction to the public.

In 1998, Sun Yue recruited his best friends in the entertainment industry, Zhang Xiao-Yan and Tao Da-Wei, to shoot the Foundation's first promotional video Life Station, which had two versions. In the short 40-second video, three people are sitting at a bus stop carrying their luggage. The bus stop sign is a metaphor for the transfer from life to death rather than the end-all of the journey of life. The video appeals to the public to make preparations for this journey ahead of time in order to avoid any regrets.

"Each of the three had their own TV shows, and there was very little opportunity for them to work together, so this promotional video became a big selling point at that time," says Wang Nian-Ci, who notes that the three actors played important roles in each other's personal lives. Tao Da-Wei introduced Sun Yue to the Christian faith, and Sun Yue convinced the two friends to start charity activities. Privately, the three would also volunteer in the hospice ward, singing and talking with the patients and were named the “Three Musketeers of Charity” by the media. Since the promotional effect of Life Station was very good, in 2010, the 20th anniversary of the Foundation, these three friends were once again invited to shoot a hospice promotional video together.

"In the face of life and death, what is your attitude?" In the promotional video, the three people played the Three Wise Monkeys in the famous Japanese proverb: “See No Evil, Hear No Evil, and Speak No Evil.” They cover their eyes, ears, and mouth respectively. It symbolizes Chinese society and culture, where death is a taboo topic. As the three people slowly loosen their hands that cover their senses, they call on everyone to "face death by listening, talking, and watching.” Not only should they be prepared for death, but they are also encouraged to communicate more with their family members so that they can leave with dignity. This advertisement brought the topic of life and death to the table in a relaxed and witty way, fully conveying the appeal of the time, so that death is no longer something dark and tragic that can only be discussed in secret.

This Three Wise Monkeys video lasts only half a minute; however, the three celebrities also shot a one-and-a-half minute promotional video in the airport terminal, which symbolizes arrivals and departures. They talk freely about Advance Care Planning, which was being promoted at the time, telling the public what to listen to, what to look at, and what to say in the face of life and death. These two videos have left a deep impression on the audience, and they are still catchy now. 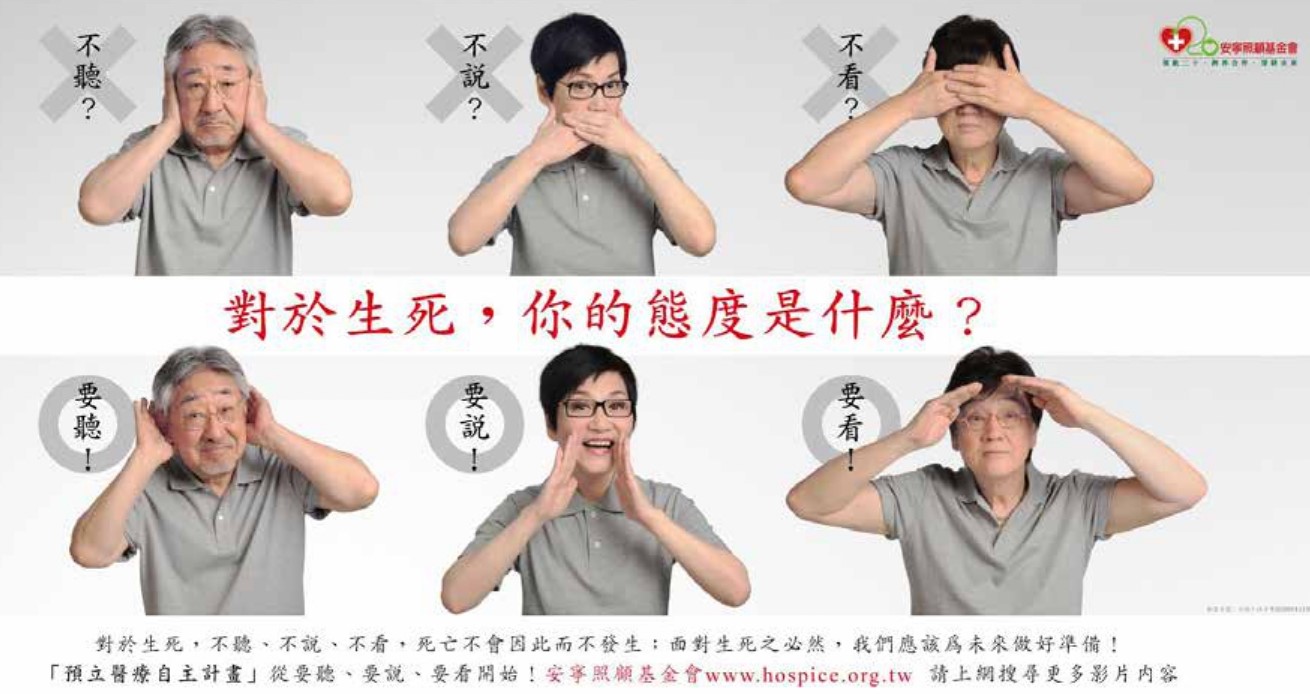 On his 70th birthday, Sun Yue gave himself and his family a gift of life, which was to sign the Do Not Resuscitate (DNR) and Health Care Agent Appointment forms. Not only did he choose to leave the world with dignity without a tracheotomy or intubation when his health condition reaches the final stage, but the funeral plans had already been discussed with his family. The process of making these medical decisions also allowed Sun Yue to ponder his feelings about life and death, as well as to self-reflect on the relationship with family and friends. After his careful life review, Sun Yue even unexpectedly reconciled with some old friends, who had previously drifted or soured in relationship.

In 2018, Sun Yue died of illness. At his memorial service, Zhang Xiao-Yan recalled that the Three Musketeers once talked about “how to recognize each other in heaven.” She tried to imitate Sun Yue’s tone and said, "Don’t worry, just follow me. Like doing charity, I go first, and you follow.” This passage not only showed that their friendship was mutually supportive, but also demonstrated their mutual understanding and cherishing of life. 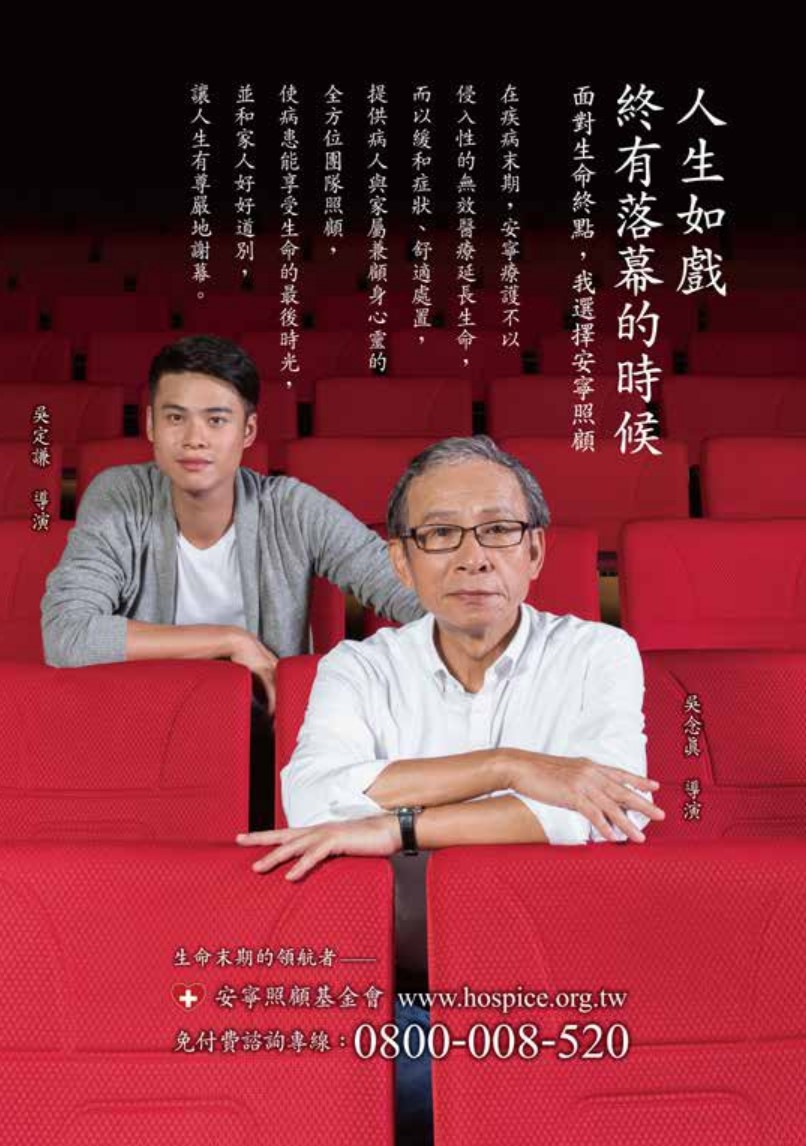 "Uncle Sun always regretted that he was not able to shoot advertisements in Hokkien," says Wang Nian-Ci. As Sun Yue's illness worsened, the Foundation began to look for an advertising spokesperson to succeed Sun Yue, hoping to find one with maturity and popularity that matched those of Sun Yue. This person must not only be of the same mind with hospice and palliative care, but also be able to speak in Hokkien and help the concept of hospice penetrate into every corner of Taiwan.  Director Wu Nian-Zhen, known as Taiwan’s Most Well Known  Storytelling Ou-ji-sang (i.e., polite term for an elderly gentleman in Japanese), therefore qualified.

"I told my son long ago: I hope I can decide the final arrangements of my life!" says Wu Nian-Zhen, who grew up in a mining village, and witnessed the tragedy of sudden losses of life and fragmentation of families caused by accidents in the mine when he was young. In his middle age, he accidentally fell down at home. The injury caused hemorrhage and he was once critically ill. The neardeath experience shocked him, as he recalled: "It turns out that death can come at any time!" After that, Wu Nian-Zhen came into contact with the Foundation by chance. After understanding the spirit and value of hospice, he readily agreed to take over the responsibility of the spokesperson for hospice and palliative care and unconditionally help the foundation shoot public service promotional videos.

"In a play, the curtain call is usually the beginning of another performance; but is life like this, too?" In the advertisement Life, Like a Play, Will Finally Have Its Curtain Call, Wu Nian-Zhen sits in the audience with his son Wu Ding-Qian. Watching the staff move about at the end of the play, he first confesses from the perspective of a director that he feels unwilling to end each scene, but then, if he remains on the stage, the play would lag and become a bad one, which would be torture for himself and others.

As soon as the director-perspective changes, Wu Nian-Zhen confides to Wu Ding- Qian from the role of a father that life is like a blossoming flower, and when his life ends, he wishes his son to not let him receive invalid treatment out of reluctance to let him go.

Life, Like a Play - The Perspective of Interpretation Is Adored by the Younger Generation

"Such a concept of narration is very well received by the younger generation," observes Wang Nian-Ci. For the concept, he explains his views on life and death from the perspective of a director, which also received widespread acclaim. This advertisement encourages the public to be open-minded in viewing matters of life and death, and to take action in prioritizing Advance Care Planning (ACP) and Advance Decision (AD).

In addition to shooting promotional videos, Wu Nian-Zhen also discussed life and death issues in dramas for the first time. In 2018, he and his son Wu Ding- Qian cooperated and adapted American playwright Margaret Edson’s work Wit, which had won a Pulitzer Prize, into the stage play After You Turn Around, which tells the story of a cancer-suffering professor moving towards the end of life. As a sponsor, the Hospice Foundation, by way of block booking, also invited the public to donate money to watch the play as well as to release their worries and dissatisfaction about life through drama.

The Hospice Foundation has now reached its 30th year since its establishment. At the very beginning, Sun Yue went about alone in promoting hospice care, then invited his best friends Tao Da-Wei and Zhang Xiao-Yan to promote together, and finally Wu Nian-Zhen and Wu Ding-Qian continued with their father-son dialogue as a genuine endorsement of hospice. Through the exposure of celebrities, the Hospice Foundation has accumulated a lot of energy for the promotion of hospice and palliative care. Since the beginning of its establishment, Wang Nian-Ci has been dedicated to the publicity of the Hospice Foundation. Her gratitude and respect to the spokespeople is self-evident. She can only say emotionally at the end of the interview, "Nowadays, people are familiar with the idea of hospice care. I’d like to thank the spokespeople who have accompanied us all along the way."