With the Hospice Foundation having reached its 30th year, the current Chairman Yang Yu-Zheng and CEO Lin Yi-Yin led everyone to review this journey of love and gratitude. At the same time, the Hospice Foundation is standing at the key intersections of its fourth decade, looking for the next steps and fearlessly moving forward. 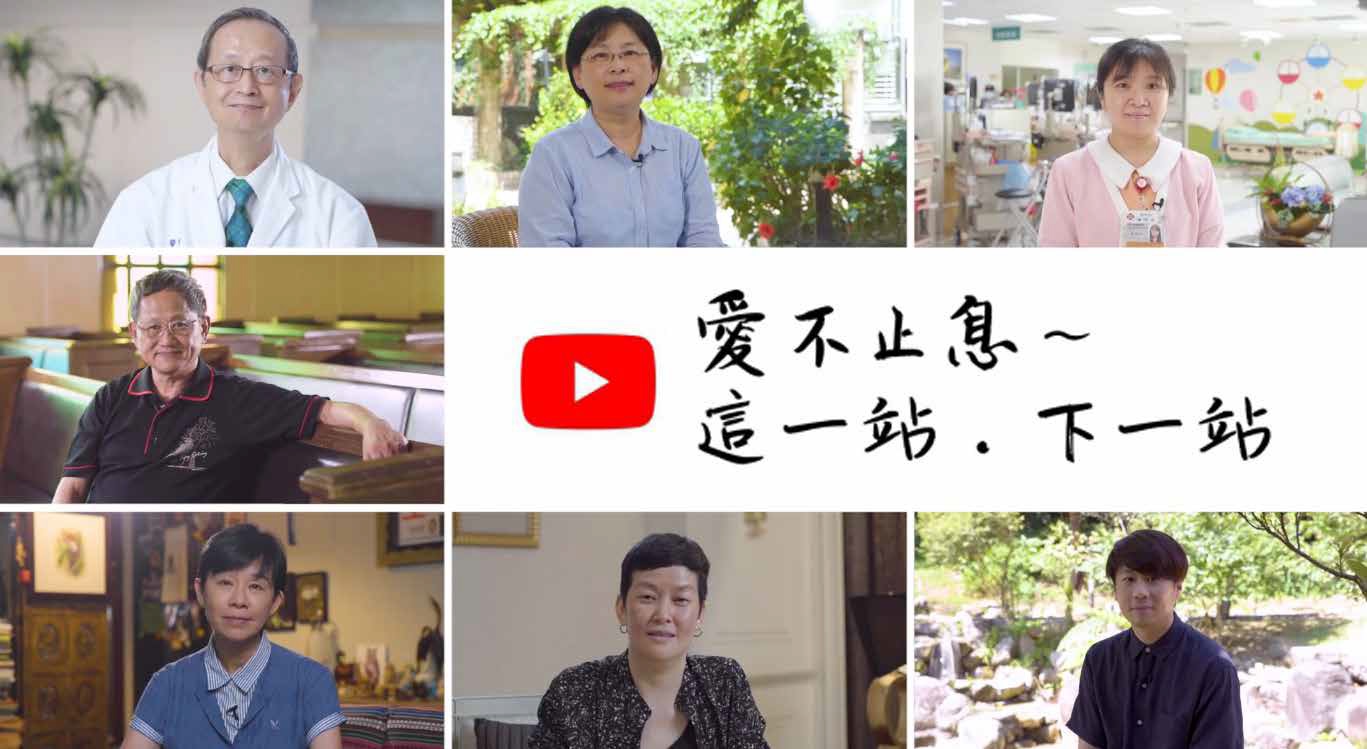 “While all the sheep are bowing their heads eating the grass, the shepherd needs to look into the distance and lead the whole flock to the next green meadow.”

2020 marked the 30th anniversary of the Hospice Foundation, and also the 44th year of my service at MacKay Memorial Hospital. Back then at the initial stage of my service in the hospital, my scope of work was mainly obstetrics, and I captured the wonder of life as children come into the world. After nearly 30 years, I chose to focus on the diagnosis and treatment of gynecological cancer. From welcoming life to looking directly at the end of life, it seems that these are two extremes. Nevertheless, being able to provide for the whole person and family care through the entire process with the hospice and palliative care team, I have found persistence in accompanying the patient to the last moment of life. I have never given up on persistence on the road of practicing medicine.

In terms of the origins of contemporary hospice and palliative care, it began in Britain in the 1960s. Since then, the seeds of the hospice spirit have spread all over the world, including in Taiwan, where hospice care began to sprout in the 1980s. Later, with the help of MacKay Memorial Hospital and Shuanglian Presbyterian Church, the Hospice Foundation was established in 1990 to shoulder the important task of promoting the spirit of hospice and palliative care. The first phase of the Foundation was to be the leader of Taiwan's hospice care. Under the leadership of many predecessors and experts, we have assisted various hospitals to set up hospice wards to improve the accessibility of hospice care.

During the second stage of advancing hospice are, the Foundation actively promoted legislation in order to seek better protection for patients. Through the links among societies and associations and the power of relevant professionals, the Hospice Palliative Care Act and the Patient Autonomy Rights Act sprang to life one after the other. In particular, the Patient Autonomy Rights Act was formally implemented in 2019, allowing people in Taiwan to advance the autonomy rights of receiving a good death.

The Foundation not only has a solid foundation in Taiwan, but is also committed to international exchanges. In 1989, the Asia-Pacific region intended to establish a transnational hospice care network to communicate with each other and improve capabilities. With the active participation of the Hospice Foundation, Taiwan became one of the founding member states. Additionally, in the Asia-Pacific Hospice Conference, which is held every two years, Taiwan has repeatedly topped the Asia-Pacific countries in attendance, number of papers published, and outstanding paper awards. The two international conferences hosted by Taiwan have also received great response. It is foreseeable that Taiwan’s dedication to and achievements in hospice care could eventually shine on the international stage in the face of repeated headwinds.

While welcoming the 30th anniversary of the Foundation, we should not only celebrate and review the footprints along the way, but also look forward to the future. In the next 10 years, the Foundation will continue to work hand in hand with all the partners engaged in hospice care to deliver life education with love to all corners.

“We believe that in the beautiful environment of the hospice field, aloneness and loneliness will not penetrate into our hearts, but with our arms always gently supported, we will bravely march forward the entire way.”

Many years ago, a Hong Kong Hospice Team visited the Foundation. The person in charge of the organization asked me, “Do you often find it difficult to make decisions?” I was surprised by the question because it had never happened in my six years at the Foundation. I replied to him that the purpose of the Foundation was always clear. Whatever could help terminal patients without harming the Foundation, we were willing to do it. As long as we adhere to this core value, no decision would ever be too difficult.

Even as the Foundation had decided to promote hospice and palliative care in long-term care institutions so many years ago, there will always be potential setbacks ahead. Our ability to progress could be hindered by the variety of institutions, regions, scales, and even the mentalities of the operators. In addition, besides nursing and social work professionals in the long-term care institutions, a large proportion consisted of the caregivers, which had a relatively high turnover rate. Very often, after a series of hospice education and training were completed, the trainees resigned and we had to start over with newcomers.

I have been stumbling along on the road to the long-term care agency. Even with a lot of effort put in, it is still difficult to have a complete and effective model. I therefore often dangle between directions and goals, modifying them as we move forward. Although it is difficult to achieve clear results in the long term, the board of directors still fully supports what we are doing because it is the right thing and what the Foundation should be doing.

Although making decisions is not difficult for me, achieving everything is never easy. We are fortunate that constant support has always been with us along the way.

Back when Taiwan again decided to host the Asia-Pacific Hospice Conference (APHC), the preparations for the conference lagged far behind due to multiple external problems, including having too many topics and details to discuss in organizing this hospice event. Unlike some others, I did not have a prior background in the hospice field, and there was no time to quickly become familiar with everything. As a result, I was almost drained of all my energy in organizing this conference.

The reason why this international conference was successfully held in a short period of time was twofold. One, it was due to the solidarity of Taiwan’s hospice community; and two, it was due to all the hard-working directors, experts, and colleagues of the Foundation. I was greatly encouraged, especially as I had just stepped into my hospice role and it had felt overwhelming.

Along the way, the Hospice Foundation has never forgotten its roots. We often look back on everything over the past 30 years and thank our predecessors for laying down a good foundation. Be it courses, advocacy, or even fundraising for the foundation, we are deeply moved and fulfilled by all their contributions. With this in mind, we happily look forward to see Taiwan's hospice-related groups become established one after another, as people's awareness of death improve and the legislation become more thorough. At this time of vigorous development, we also continue to reflect on how we should carefully innovate and draw a beautiful blueprint for the next 10 years based on the strong foundation already laid down by the predecessors.

The road ahead is still very long. However, every colleague of the Foundation is equipped with perseverance and determination. We believe that in the beautiful atmosphere within the hospice field, aloneness and loneliness will not penetrate into our hearts, and with our arms always gently supported, we will bravely move forward the entire way.

The Next Step of Love Is about to Start

"Looking back at the past 30 years, our core work has remained the same," says Lin Yi-Yin. Even though promotional education has been in effective for 30 years, it is still incomplete. Entering the fourth decade, it will still be one of the Foundation's most important missions.

Although it has been 20 years since the Hospice Palliative Care Act was passed and the regulations have been near complete after three revisions, the Foundation's publicity focus is still on clinicians and the public. According to Lin Yi-Yin "Before legislation, we actively promoted to make everyone understand the needs and importance of legislation; after the legislation, we continue to advocate, in the hope that with the support of policies and legal provisions, hospice and good death will take root in everyone’s heart.”

Not only should the hospice wards team but also the medical team in the hospital, regardless of department, should have the concept of hospice and palliative care deeply instilled. In a sense, it is similar to how most people intuitively step on the accelerator instead of the brake when seeing the yellow of a traffic light flashing on the road. Isn't it the same in modern medical culture? Just as passers-by should develop the traffic habit of slowing down at the yellow light, the concept of hospice also needs to be integrated into the heart and life of medical staff. When the medical team does its best to take care of the patient, but is stuck in the bottleneck because it cannot break through the medical limit, the Foundation expects that, in the first-line clinical staff's mind, the option of hospice and palliative care will naturally emerge.

Therefore, the Foundation's promotional and educational work for the medical field must not stop; instead, they should be even more active than before. When the spirit of hospice and palliative care is deeply rooted in the hearts of all clinicians and becomes part of their professional capabilities, it can help more patients make comprehensive preparations while they still have the time.

Moreover, advocacy and education to the public continues to be a major challenge in the future. For instance, National Health Insurance is inexpensive and convenient, such that the public might mistakenly assume that having extensive active treatment would inevitably lead to miracles in saving lives. In response to this challenge, consider a traffic light. If we can introduce the concept of hospice  into people's minds when their bodies and minds are still healthy and strong – like at a green light when people are ready to rush forward – it will be easier for them to reach consensus with their families and medical staff when their lives slows down at a yellow light, that is, when they confront their illnesses and weaknesses. “The real hospice is not to ask patients what they want when the yellow light is about to turn red and go out since their consciousness is blurred during this short, warning period,” says Lin Yi-Yin.

Therefore, another important goal of the Foundation is to help people think about their own life values and directions. When they clearly understand what they want and wish for, they can more easily decide what they need or don’t need in the last stage of life and even take the initiative to check with medical staff if they have other options available.

Let Love Spread to Every Corner

As for the Foundation's next step, it is to integrate hospice and palliative care into the long-term care field. Although the Foundation started the dialogue five years ago, it has been difficult to move along the way as it always seems to go three steps forward and take two steps back. "The ultra-aging population will only increase the demand for hospice, and the development of long-term care is a goal and a mission," says Lin Yi-Yin. With this firm belief, the Hospice Foundation is striding forward to the next ten years. Just like Chairman Yang Yu-Zheng's expectations, it will become "the shepherd leading the flock" and moving forward to the next meadow to embrace the green grassy plains.