In 2000, Taiwan ’s legislation passed the Hospice Palliative Care Act, making Taiwan the first country in Asia to provide natural death for those who desire it. Since then, it has undergone three amendments. The content focuses on practical needs, and assures dying well for Taiwanese people. The act celebrates its 20th year in 2020, and this social movement is still going strong.

Self-initiated from private medical institutions and gaining support in legislation, the spirit of hospice and palliative care today has grown throughout Taiwan. The service targets have expanded to eight major non-cancer terminal stage patients, supporting them with dignity towards the last stages of life. Meanwhile, the one and only goal of hospice and palliative care is to leave no regrets for both the living and the dead.

The modern hospice and palliative care movement first started in the United Kingdom. Ms. Cicely Saunders, a nurse, social worker and physician, could not bear to see more patients suffer from ineffective treatments, and so established an ideal medical institution called St. Christopher's Hospice in 1967. It has become the first institution in the world to cooperate with medical teams to help cancer patients in receiving a good death.

However, this campaign for the patients was not initially accepted. For example, the hospital managers believed that hospice care will not make money. The medical staff was already extremely busy with medical services for patients, and it was quite difficult to spare extra time to relieve the suffering of the patients even if one wished to. Fortunately, the hospice concept was finally supported by Mr. Xie Ying-jie, who was then Chairman of Mackay Foundation. After deeply understanding the spirit of hospice and palliative care, Mr. Xie thought that hospice and palliative care displays the love of Jesus Christ. He stated, "Even if we lose money, we have to put this into action." As a result, this decision completely broke the traditional point of view in Taiwan’s medicine.

Promoting the Idea of Dying Well in Taiwan 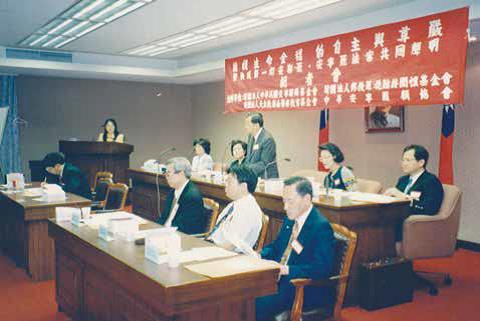 In February 1990, Mackay Memorial Hospital took the lead in establishing the first 18-bed hospice ward in Mackay Memorial Hospital – Tamsui branch. At the time, expenditure on hospice care was not included in the National Health Insurance. Toward the end of the same year and considering the financial needs of the patients’ families, the Hospice Foundation of Taiwan was established. In addition to providing financial support, it also endeavored to promote the hospice and palliative care movement, gradually revealing to the medicine field and the society as a whole this important issue.

Since Mackay Memorial Hospital had successfully launched the first hospice care in Taiwan, medical institutions such as Cardinal Tien Hospital and National Taiwan University Hospital have since successively set up their own hospice wards. Mackay Memorial Hospital further built and opened the Mackay Hospice and Palliative Care Center in 1998, sending nursing staff to the United Kingdom to study palliative care, while continuously increasing the number of hospice beds. In 2000, it was listed simultaneously with St. Christopher's Hospice as the world's two largest hospice and palliative care institutes.

In the early years when hospice care was still developing in Taiwan, like-minded people expanded in numbers and contributed their expertise to the field of hospice care. They gathered individual strength into full power in advocating hospice care to take further key steps forward. Two important advocators were Dr. Zhao Keshi, known as the Mother of Taiwan's Hospice and Palliative Care, and Professor Lai Yun-liang, the Father of Taiwan's Hospice and Palliative Care.

During her service in the medical center, Dr. Zhao Ke-shi encountered many patients suffering from meaningless medical treatments, leading Dr. Zhao to ponder on the true meaning of life. She then traveled to the United States to obtain a Doctoral Degree in Palliative Care, and went to St. Christopher's Hospice in the UK to shadow doctors there.

While Dr. Zhao Ke-shi made great strides in advocating the concept of hospice and palliative care around Taiwan, she received attention and support from Mr. Jiang Qi-wen, then a National Congress Representative. She seized the fiveminute opportunity at a national proposition meeting to talk with him about the issue of hospice and palliative care. This moment can now be traced back as the turning point for the creation of the Hospice Palliative Care Act.

In May 2000, the Legislative Yuan passed the third reading of the Hospice Palliative Care Act. This act has become the first of its kind in the Asia-Pacific region, and Taiwan has become the only country that assures and respects natural death by legislation. However, people who have been pursuing hospice care all this time know very well that this is only the beginning of a long journey, and that there is still a long way ahead for normalizing hospice care in Taiwan. 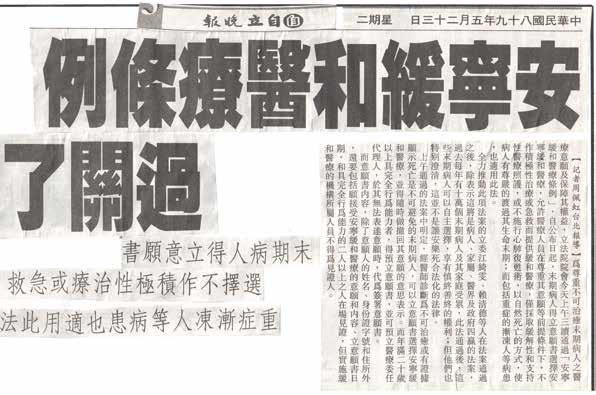 Once Hospice Palliative Care Act was put into effect, the progress in hospice care in Taiwan accelerated. For example, hospice and palliative care began to be included in the National Health Insurance. The National Health Bureau, Ministry of Health at the time piloted Hospice Shared Care, and the Health Insurance Bureau officially included Home Hospice Care into the payment standards of medical expenditure. Furthermore, the service targets expanded from patients of cancer and ALS (Amyotrophic Lateral Sclerosis) to another eight non-cancer disease categories.

The Hospice Palliative Care Act has undergone three amendments through the years. The first amendment allowed signers to withdraw the documents. As for the comatose patients, a representative relative could sign the consent document on behalf of the patient; however, he or she could not make the decision for the patient on a respirator to extubate or not.

The hospice care community worked relentlessly for eight full years to finally achieve a second amendment that allowed tens of thousands of intubated patients to have the opportunity to extubate and enjoy their final comfort and dignity of life. This amendment allowed the removal of respirators under the condition that there is a unanimous agreement among the three closest family members, including spouse, adult children and grandchildren, and parents, along with an agreement from the medical ethics committee of the medical institution.

Nonetheless, many terminal stage patients have already passed away before further amendments were made. Two years after the second amendment, the third amendment was revised to simplify the process of terminating treatments for intubated patients by having just one person, the closest relative, to sign an agreement to extubate the patient. If there is no designated agent or a closest relative's consent, the doctor can issue a doctor's order in accordance with the best interests of the terminal-stage patient after consulting with the hospice and palliative care staff.

In 2014, the idea of community hospice care started with integrated services from district health centers, home care centers, and clinics. It was expected that in addition to relying on the hospice care within medical institutions, combining home care system from communities can then further expand the strength of hospice care.

Over the years, the concept of hospice care has gradually gained publicity through propaganda by the government and private sectors. According to the survey of the Hospice Foundation of Taiwan, in the year 2000, only 10% of Taiwanese people were aware of hospice care. The majority of the people think that hospice care means waiting for death. Now, nearly 80% of the people have recognized and adequately understood what hospice care is all about. As of April 2020, 690,000 people in Taiwan have signed the Advance Hospice Palliative Care and Life-Sustaining Treatment Choices of Intent (DNR), and are determined to maintain individual dignity towards the end of life. At the same time, the passing of the Patient Autonomy Law has once again pushed the assurance of dying well in Taiwan to a new peak.

Some people say that the promotion of hospice and palliative care is a quiet yet powerful social movement. No matter how many years it has been, this movement has always been closely tied to the core concept of gently caring for terminal stage patients by hospice and palliative care system towards the end of their lives. At the 20th anniversary of the Hospice Palliative Care Act, through continuous reflection and further life education, more people are embracing immense calmness in their hearts.