To further train and improve upon Taiwan’s hospice and palliative care, in February 2020 the Hospice Foundation of Taiwan organized a delegation of medical professionals to visit Japan and exchange experiences of Advance Care Planning (ACP) and hospice knowledge.

Following Taiwan’s Hospice Palliative Care Act, the Patient Right to Autonomy Act—the first patient-centered legislation in Asia—launched in early 2019 which extended the scope of hospice care. Not only applicable for terminal cases, the Patient Right to Autonomy Act allows any person who has specific clinical conditions the right to express his/her own willingness to receive hospice care.

Neighbouring Japan has promoted home medical care and hospice for many years already, and only recently, has started to encourage ACP (which is also called Life Meeting and Advance Directive in Japan). In order to acquire a diversity of thoughts and ideas on the Patient Right of Autonomy Act, the Rotary Club of Osaka Umeda and Rotary Club of Taipei Tienmou worked together to assist the Rotary International Foundation to hold the Global Awards and Professional Service Training Project. They appointed the Hospice Foundation of Taiwan to lead a professional medical team to areas in Japan where ACP is practiced, including Seirei Mikatahara General Hospital, Kameda General Hospital, Hamamatsu City, and Tochigi City. Team members also attended a seminar held by the Japan Association for Clinical Ethics.

To Legislate or Not? Different ACP Approaches in Japan and Taiwan 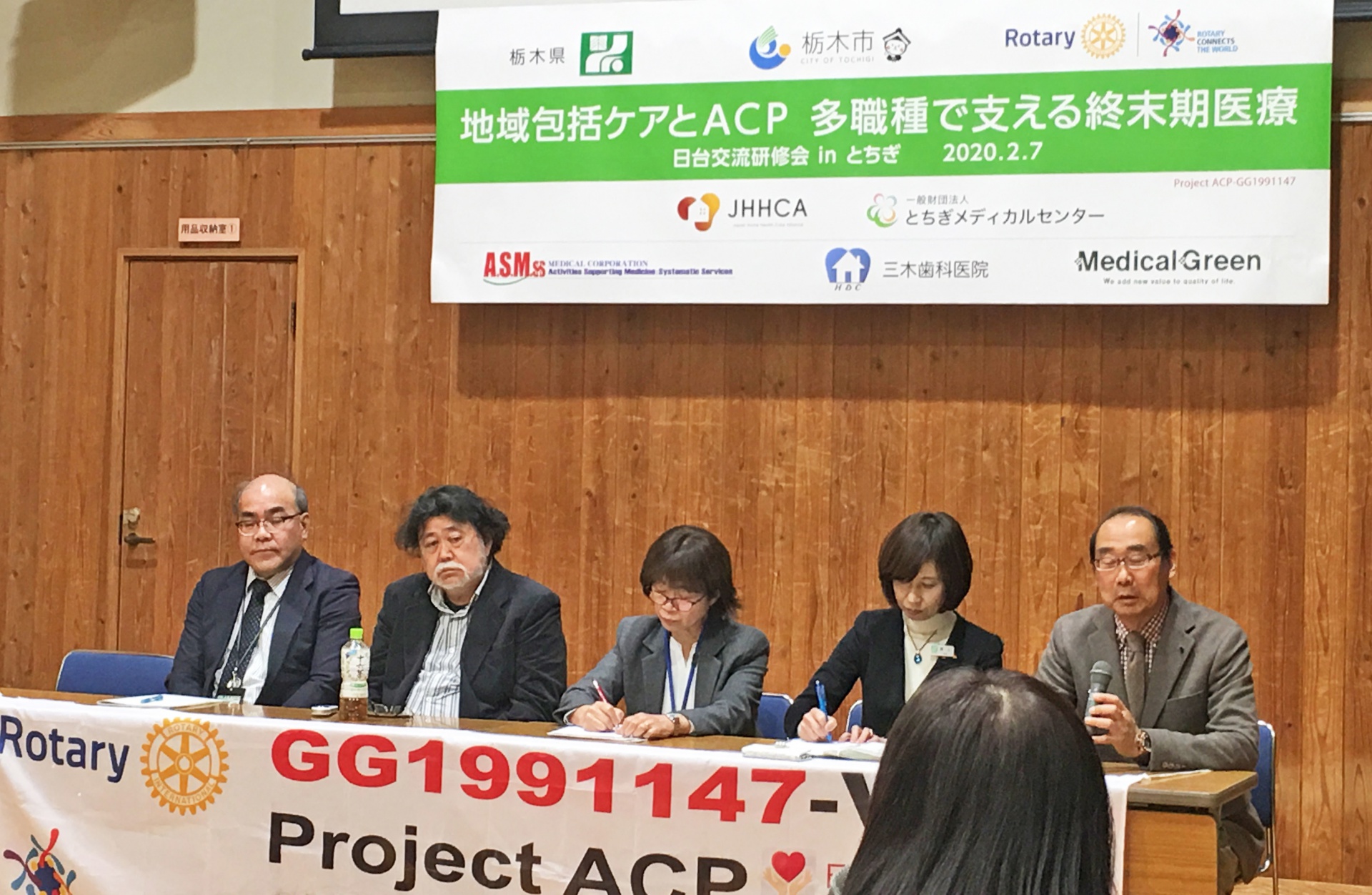 In 2019, there were 28.4% of the Japanese population (or around 35,880,000 people) who exceeded age 65; this makes Japan the most aged society in the world. The challenge to take care of this aging population increases as Japan is vast in territory with a dramatic gap between the urban and rural residents. To cope with the rapid aging population, Japan developed a long-term home medical care system in 1980, and focused on those areas where general medical care is lacking. This policy created a strong doctor-patient relationship and helped the local government to promote ACP by assisting patients to spend their last days in familiar surroundings.

Dr. Chun-Kai Fang, the Director of the Hospice Foundation of Taiwan and also the leader of the delegation to Japan, noted that although both Taiwan and Japan promote ACP, these two countries’ approaches differ in significant ways. On the one hand, Taiwan has legislated the Patient Right Autonomy Act to protect patients after they have signed the Advance Decision (AD); on the other hand, Japan utilizes ACP through an ethical lens and encourages local government to promote ACP through the home medical care system.

These two different approaches were developed in large part to complement the two countries’ different medical systems. Taiwan has excellent medical care accessibility and health insurance coverage. As a result, it regulated the Hospice Palliative Care Act 20 years ago in order to guide health care personnel when they provide services and to protect patient rights, thus preventing unnecessary medical disputes. However, as Vanessa Lin, CEO of Hospice Foundation of Taiwan, carefully observes, “Japan considers the dying process a natural human right, which is not necessary to legislate. Even if there is legislation, how could it be tailored to fulfill each case’s unique needs?”

Besides the legal aspect, the forms of applying ACP also differ between these two countries. In Taiwan, the government formulates AD as an unifying legal document, allowing patients to sign AD after receiving ACP to ensure their legal right to receive hospice care. On the other hand, Japan authorizes local governments to promote their localized versions of ACP. Although the entire ACP process has no legal binding, local governments serve the same purpose to communicate effectively with patients and families about dying well and the value of life.

For instance, Japan’s Shizuoka Prefecture’s Hamamatsu City uses the Naotora diagram[1] to illustrate the entire process of ACP, including: emergency contact information, various medical decisions at different stages of diseases, location where patients wish to pass away, funeral arrangements, and etc. The Naotora diagram is intentionally simple and clear in order to easily lead the prefecture’s patients through their end-of-life issues step by step. 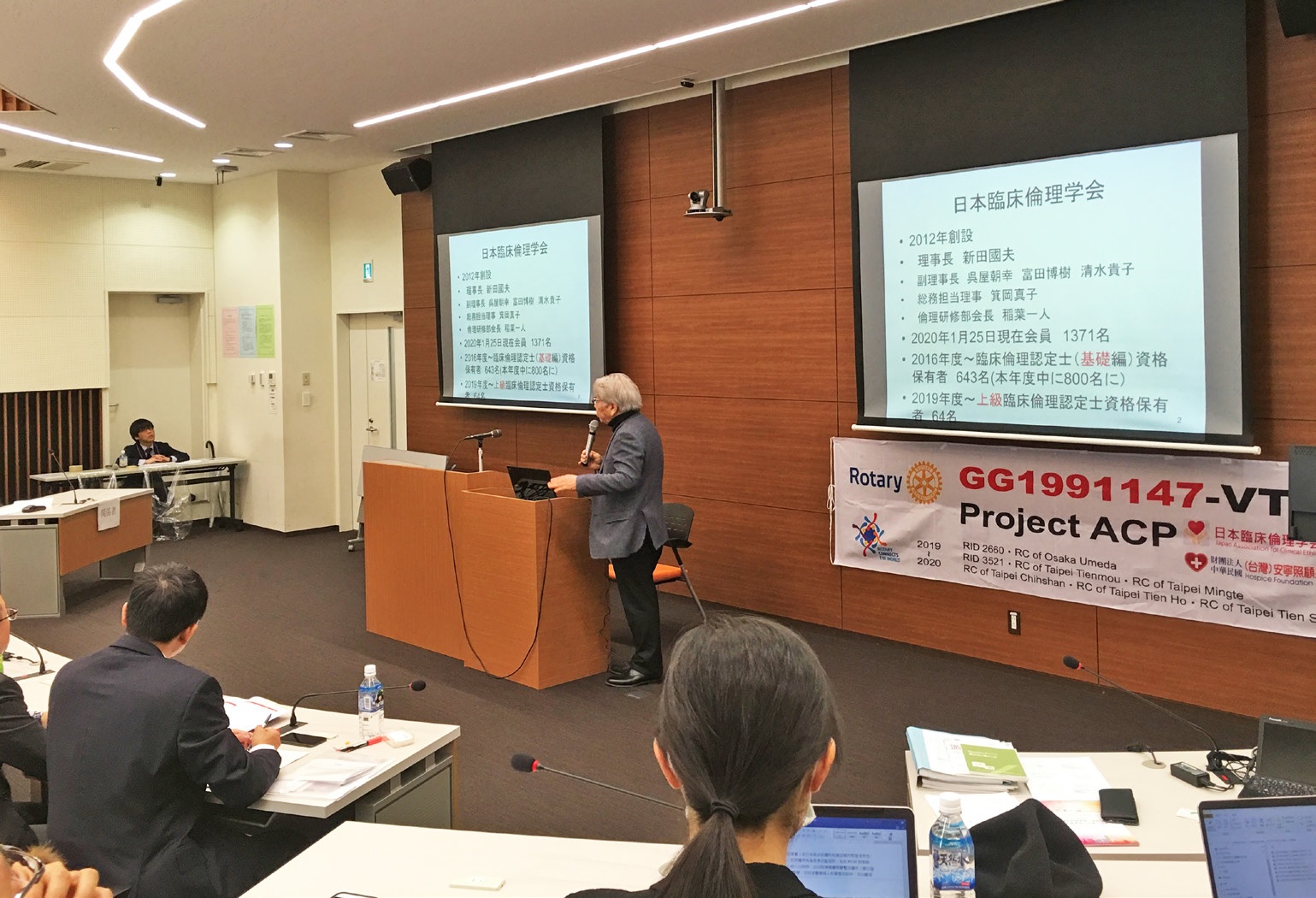 Various local governments and organizations in Japan have launched similar promotional materials. Some use local his torical f igures l ike the Naotora diagram (also known
as the Life Meeting Notebook); others translate the America Coda Foundation’s Go Wish Card into the Japanese language. Certainly, the materials may be different, but they have the same purpose to guide people to think more deeply about their lives and life decisions.

[1] Naotora diagram ( 直虎表):
Ii Naotora is a historical person in Shizuoka Prefecture. The local Japanese government utilizes this cultural identity to better promote the important policy among the local people.

During this visit, team members noticed these two countries have different approaches and mindsets regarding ACP and hospice. “There are both pros and cons, but what we learned most is how to reach a balance between ethics and law on the complicated life issue,” says Dr. Chun-Kai Fang.

Vanessa Lin mentioned that the Patient Right to Autonomy Act has been in effect for over one year, and medical staffs have encountered challenges while applying it. For instance, before visiting Japan, the Taiwan delegation tended to focus more on how to adapt to the regulations of the Act, “but now we have to think outside the box, and consider this issue from the ethical side.”

In Japan, ACP is not limited to hospital premises, and there is no need for regulations in providing consultation or signing the contract; rather, ACP is merely a process to assist patients towards hospice care. It is also not something that needs to attain specific results, not something that can be quantified.

As an example, Vanessa Lin cites a medical team in Tochigi City. This group is composed of pharmacists, nutritionists, nurses, physical therapists, dentists, and specialized medical officers. For over a decade, they have conducted home medical care for patients. Besides their daily work, the team provides household visits whenever there is a need; therefore, they have established a good doctorpatient relationship, which allows them to easily and naturally start the ACP conversation and help patients embrace hospice care.

Life is full of difficult choices, and Japan is dealing with how best to provide ethical hospice care in the least harmful way for patients.

During the visit, the Japan Association for Clinical Ethics hosted a two-day seminar, which included a discussion about a dementia patient who received ACP. This patient was part of a small family, and after some time, the family members became exhausted in doing the caring hemselves that they admitted the patient to a nursing home. However, they did not tell the patient the truth about the circumstances. In the end, the patient was unable to adjust to the new environment and ran away from the nursing home.

The lecturer used this example to let the team reflect upon the Four Ethical Principles: Autonomy, Beneficence, Justice, and Nonmaleficence. In this case, the family could no longer bear the burden of care for the patient, and the patient ran away after they sent the patient to the nursing home because his personal will was not considered. In other words, the patient was ignored on an ethical level. The question remains: How to balance ethics and reality among the family, the patient, and the institutional staff?

The lecturer led the team to analyze the case by examining the ethical viewpoint. "Through this activity, we are reminded that each case is unique, and we have to consider every aspect before assisting patients and their families in making an appropriate decision,” said Ching-Ping Liu, the Director of Hospice Foundation of Taiwan.

Under such a thorough process of thinking, Japan has developed different guidelines to suit various ACP types. For example, medical staff can follow the Dementia Care Guideline to conduct ACP when dealing with dementia patients; it assists the medical staff on how to perform ACP without compromising patients’ right to decision making.

Compared to Japan, Taiwan’s medical care rings a busy and rapid tempo. The medical staff is used to seeking the most efficient and effective medical practice, especially under complex situations. “However, within the rapid process, we may unintentionally overlook key details and patients’ rights; this is where we need to pay much attention to,” said Ching-Ping Liu.

Pondering the Significance of ACP from the “People” Perspective

Taiwan launched the Patient Right to Autonomy Act over a year ago, and many hospitals have since started ACP consultation clinics. Thus far, over 10,000 people have signed up for AD. Dr. Chun-Kai Fang believes that although ACP has legal status in Taiwan, it is too focused on signing contracts and completing regulations.

Instead, effective hospice care also needs complementary measures which are not currently being fulfilled. Although Japan has not legislated ACP, Japan does combine the existing home medical care with ACP so that its system is more holistic than Taiwan’s.

During this visit to Japan, one important insight gained is that signing the AD should start from creating a long-term relationship between the medical staff and patients. The service can be extended from the hospital into the community, which helps to bridge general care to long-term and hospice care. Certainly, this insight will help Taiwan to complete a more perfect long-term health care network.

Both Ching-Ping Liu and Vanessa Lin had mentioned that through this visit to Japan, our medical staff members have had the chance to rethink the true value of ACP. That is, when providing consultation from the people’s perspective, it may be helpful to downplay the forms and regulations, and instead, to focus on communicating and discussing the value and significance of life. After all, that is the original intention for the legislation of the Patient Right to Autonomy Act.