Even though January 6, 2020 was a Monday, the lobby of Taipei Main Station was full of people. Why were they there? They were there for the experiential game booths such as Life Autonomy Monopoly and Patient Autonomy School. As they watched and participated, they also burst into laughter by these fascinating games, which were designed with the purpose of familiarizing them with patient autonomy. Through these fun activities, they gained awareness of a peaceful option at the end of life. 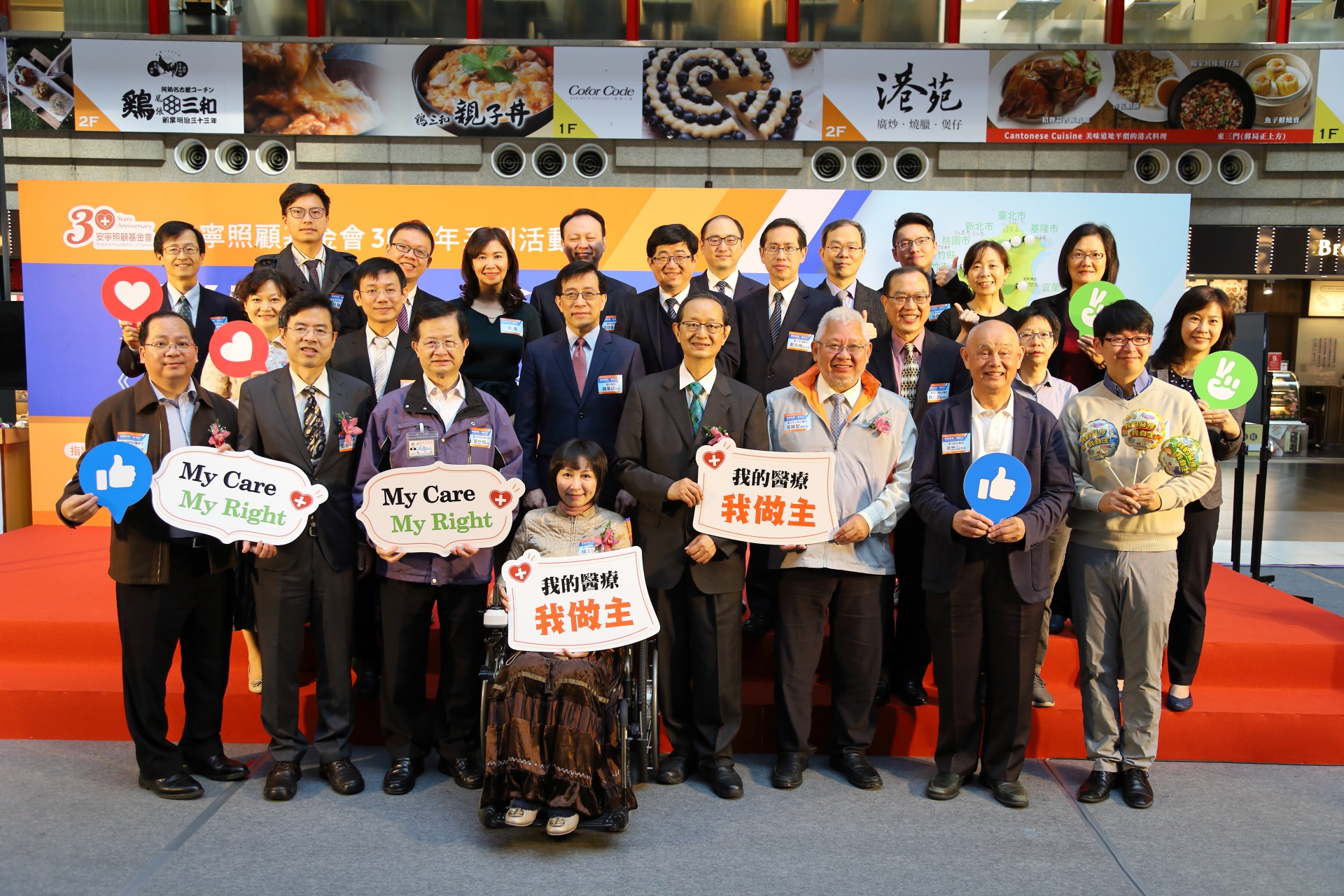 On the first anniversary of the implementation of the Patient Right to Autonomy Act in Taiwan, the Hospice Foundation of Taiwan organized a special press conference and consultation called My Medical Treatment, My Decision in order to guide more people to understand the importance of hospice care and dying well.

Patient Right to Autonomy Act in Effect for Its First Year
Number of Enrollees Exceeds 10,000 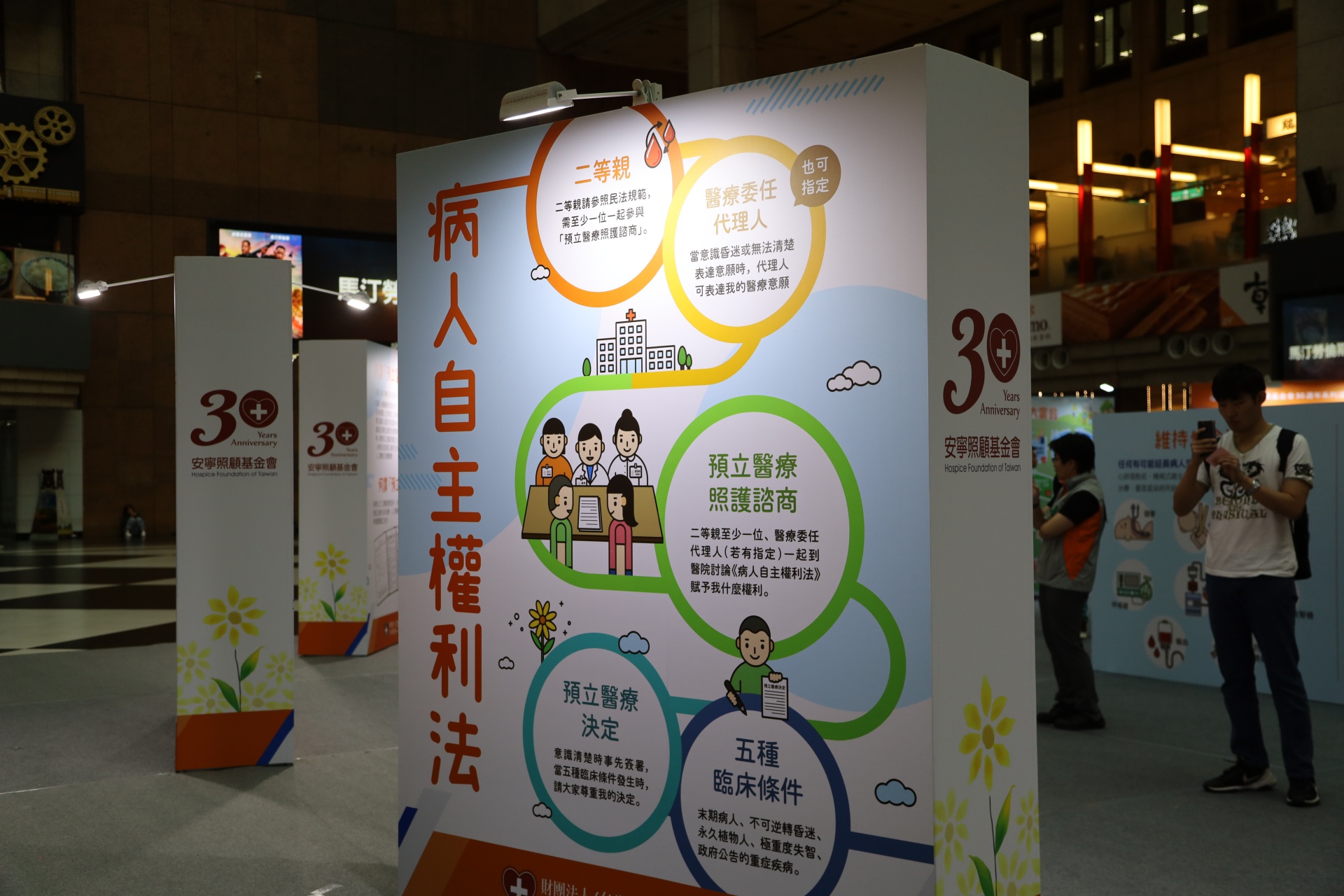 At the press conference, Dr. Cheng Shun-Ping, Secretary General of the Ministry of Health and Welfare, presented awards to the leading hospitals in 20 cities and counties as well as to the Patient Autonomy Research Center and the Hospice Foundation of Taiwan, in appreciation for their efforts in promoting the Patient Right to Autonomy Act. He noted, “The Patient Right to Autonomy Act was passed only one year ago, and it has already produced good results." Dr. Cheng pointed out that there are currently 140 medical institutions and more than 1,000 clinical staff who have completed training and joined the Advance Care Planning (ACP) service; thus far, they have assisted 11,240 individuals to complete the signing of their Advance Decision (AD).

From the perspective of front-line medical staff, such achievement has been a breakthrough. The President of Taipei City Hospital, Huang Sheng-Jian, who has long promoted the concept of hospice care and dying a good death, revealed that between 2007-2009, the number of enrollees of the “Advance Hospice Palliative Care and Life-Sustaining Treatment Choices of Intent” (DNR) increased from below 4,000 to over 10,000 after only one year since the Patient Right to Autonomy Act started. He says, "This increase in enrollments shows the Taiwanese people’s awareness of a good death is growing, and this year alone, Taipei City Hospital has received more than 2,000 enrollments of Advance Decision. Additionally, we clearly see the growth and expansion of the medical team in this area." 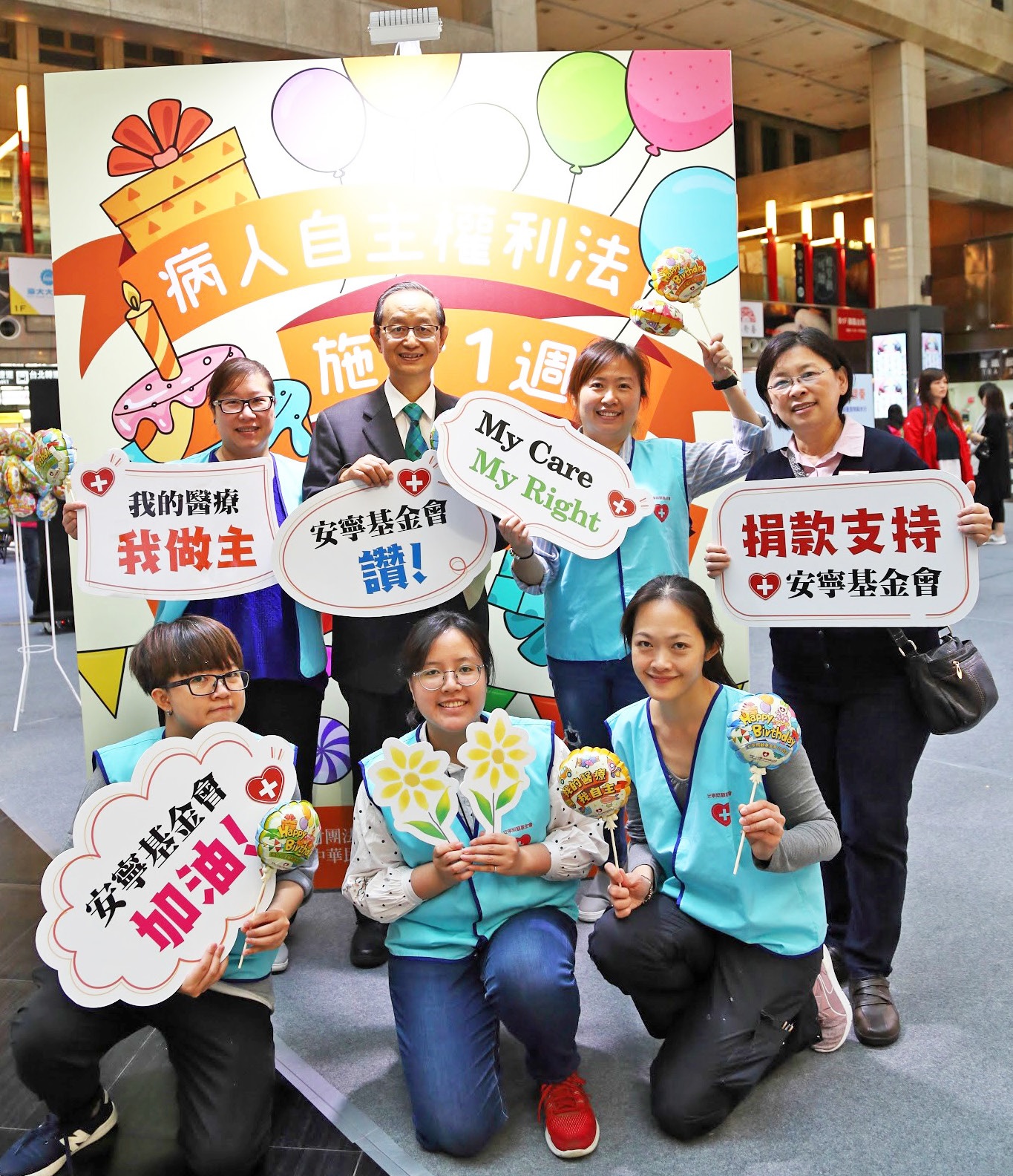 Yang Yuh-Hsin, the CEO of the Patient Autonomy Research Center, is also known as the Angel of Rare Disorders because she suffers from a rare muscle disease called Miyoshi myopathy since the age of 19. As a patient herself, she is qualified to express the importance of ACP and the need for Taiwan to have a good mechanism for people to learn how to make meaningful medical decisions.She explains, "These decisions must be empowered, that is, patients must clearly understand what the medical conditions are, evaluate their various interests and values, and thereafter, make a consensus decision with their families." Because the patients have made their ADs, there is harmony in their relationships with family and doctors rather than allowing pressure to remain on them, which could sometimes cause disputes. "This, too, is part of the shift in medical paradigm”says Yang Yuh-Hsin .

As Taiwan has become an aging society, there are still many issues that need to be resolved, either in terms of the awareness of health or of dying well issues. Huang Shier-Chieg, Director of the Taipei City Health Department, says, "Currently, people’s knowledge regarding death and dying well is still insufficient. Thus, over usage of medical resources or ineffective medical treatments still occur in clinical caring. Even if these are not the original intention of medical treatment, patients and their families are often troubled under the existing system."

"Death is something everyone will encounter. There are still many challenges to overcome and everyone needs to work together on improving the quality of life of patients." Therefore, Huang Sheri-Chieg believes that the first anniversary of the Patient Right to Autonomy Act is precisely the best time to conduct a comprehensive review. Thus, combined experiences and brainstorming by experts from all parties over the past year will help the Patient Right to Autonomy Act progress more smoothly.

Is it Easy to Sign and Difficult to Implement?
Clinically Full of Challenges

To this end, on November 30, 2019, the Hospice Foundation of Taiwan gathered medical and legal professionals to hold a Patient Right to Autonomy Act Dialogue and Practical Care Strategies.

On the topic of Clinical Challenges of a Physician's Obligation in Interpretation, Hsieh Wan-Ting, the Director of Chi-en Hospice Ward of Chi Mei Medical Center, stated, "Although life and death issues are important, they are not easy to talk about." After 2005, the relationship between doctors and patients has gradually shifted from patriarchy to autonomous decision-making. As such, in clinical practice, what doctors should say and how to say it is full of challenges. 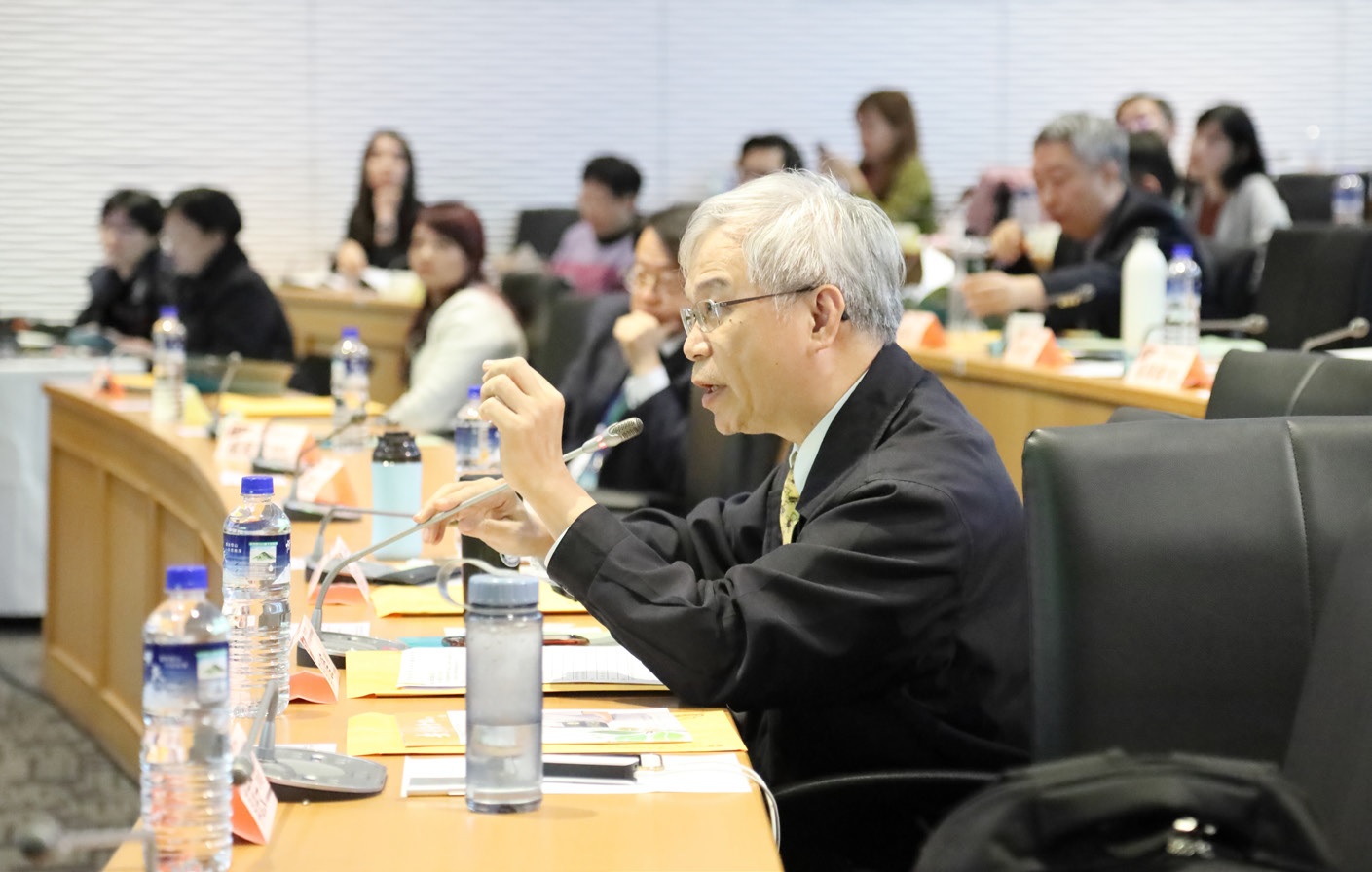 "The point is, after talking about life and death with the patient, what happens afterwards?" Hsieh Wan-Ting believes that patients should be provided with professional medical prognosis along with alternative medical options. More importantly, patients must be allowed active participation in these decisions; therefore, patient autonomy should not have only two options: agree or disagree, but rather, even after patients choose to disagree, the medical team should further understand the reasons and explain the results of non-treatment.

To further protect patient's medical rights, the Patient Right to Autonomy Act has added the role of designated medical agent. The patients’ designated agents can express or make medical decisions on their behalf when they are unable to express their wishes. Chen Chih-Hsiung, the Director of the School of Law at National Chiao Tung University, gave his professional legal opinion on "the influence of medical designated agents and relatives on the practice of a patient’s autonomy."

Chen Chih-Hsiung cited an example from the United States. The basis for the US court to judge a patient's possible wishes should be: whether it is said in a serious occasion, whether it is repeatedly expressed, and whether this willingness is consistent with the patient's values (such as religion), and so on. American non-profit organizations also developed a set of patient’s Letter of Intent. If the patient is unconscious from the beginning (such as a vegetative person) or is a minor, there are alternative judgment standards. However, if they disagree with their parents, the court will usually continue the treatment as death is irreversible. Nevertheless, such judgments may also lead to a controversy that ”may underestimate the suffering caused by life-sustaining treatments.” 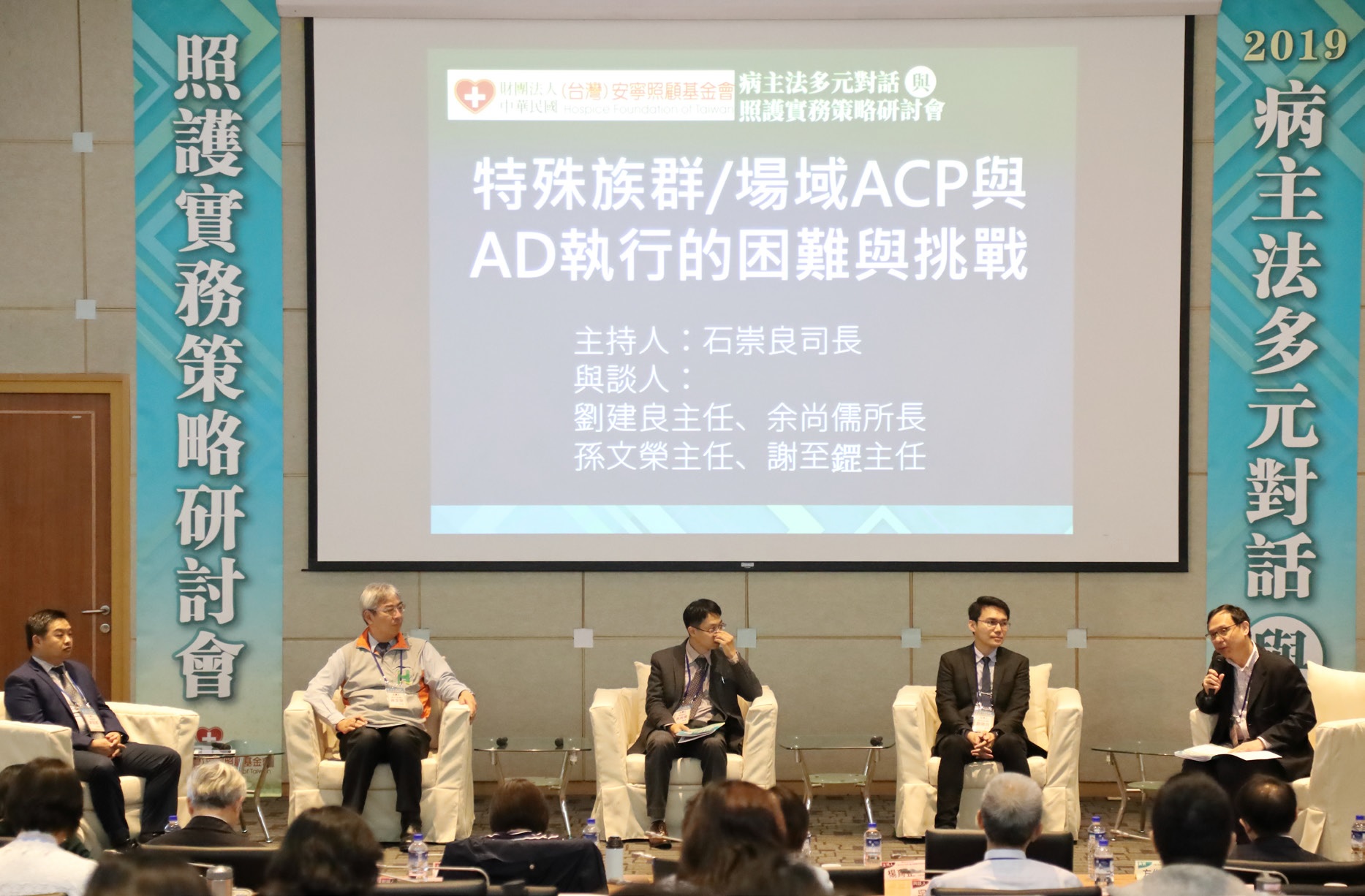 On the topic of Switching from Advance Decision (AD) to Physician Orders for Life-Sustaining Treatment (POLST), Huang Sheau-Feng, a physician in the palliative care unit of Taichung Veterans General Hospital, presented clinical challenges that have been brought forward by the Patient Right to Autonomy Act. The more common problems seen included ambiguous implementation details and skills used in communicating with the family members who disagree with each other.

Huang Sheau-Feng said, "AD was designed for patients to have a say and express their wishes during medical consultations. Once the requests of the family members are found to be different from that of the patients’ own, the team must first fully clarify the expectations of the family members, and then follow up with attentive communication.” He also revealed that it is often very difficult for family members to make the decision to "remove life-support equipment" so it
may be wise to communicate step-by-step in order to let the family members have consensus on the removal. Thereafter, observation indicators ought to be set up within a time frame. 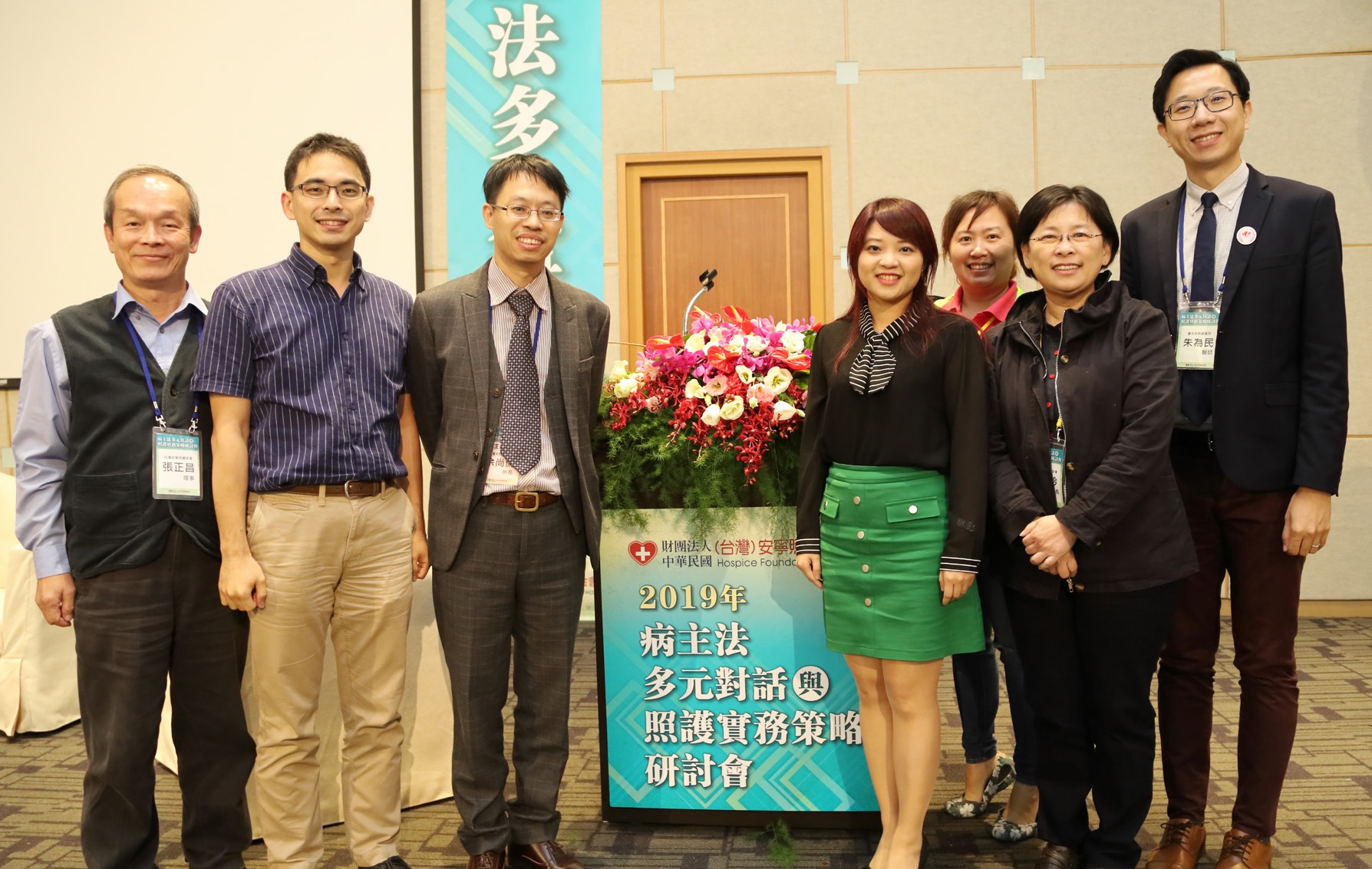 Huang Sheau-Feng provided an example. A terminal-stage patient who had refused lifesustaining treatment, artificial nutrition and hydration changed his mind during the treatment process. He noted, "The decision made at that time should override the previously written decision. Thus, the medical team needs to complete the AD change for the patient."

Yang Yuh-Cheng, Chairman of the Hospice Foundation of Taiwan said, "The Patient Right to Autonomy Act still has a long way to go from implementation to perfection. There are still many areas we need to put effort on to improve. However, what we do today will help ensure protection for ourselves and our loved ones in the future." This not only benefits our own rights, but also demonstrates the paradigm shift in Taiwan's medical culture and human rights.

The Hospice Foundation of Taiwan spared no effort to give impetus to the Patient Right to Autonomy Act in ensuring people’s right in dying well. Since 2016, the foundation has undertaken relevant programs of the Ministry of Health and Welfare and started various tasks. In addition to public education, the foundation has also started training courses to train ACP counselors and to counsel hospitals in opening consultation clinics. Currently, many hospitals in all counties, cities, and even surrounding islands provide ACP consulting. Clearly, the foundation is providing ubiquitous assistance to help all Taiwanese to accept the idea of dying well.

The Ministry of Health and Welfare also announced earlier this year that 11 rare diseases, including cystic fibrosis and Huntington's disease, will be included in the Patient Right to Autonomy Act, in which the patients can terminate, withdraw or refuse life-sustaining treatment and artificial nutrition and hydration. This inclusion will affect an estimated 32,010 patients.

Yang Yuh-Cheng indicted that due to the unremitting efforts of the past 30 years, "We can proudly say Taiwan’s medical standards and human rights in terms of hospice care and quality of death are exemplary to the world.” We are sure that Taiwan can continue to set a positive example for others to follow and for more patients to benefit.