Associate Professor So-Hi Kwon is an expert in Hospice & Palliative Care (HPC) at the College of Nursing at Kyungpook National University. She elaborated on the issues and trends of geriatric palliative care in Korea.

Kwon briefly introduced the health system and HPC in Korea, which adopted the universal health care system from Germany in 1989. As a result, health care is now very affordable, covering 97% of the total population. However, it has been over-utilized, especially in the acute care setting. For example, only 8.2% of the healthcare expenditure is for long-term care. In 2008, the government adopted the social insurance for long-term care from Japan to encourage long-term care for chronic illnesses, but this insurance does not cover HPC.

Like many developed countries, Korea has a rapidly aging population. It will become a super aging society in 2026. Kwon noted a growth of patients and expenditure with chronic diseases such that patients with chronic diseases increased by 10.9% from 2011 to 2015, as total healthcare expenditure increased by 36.7%. Furthermore, a challenge that Korea faces is end-of-life care in hospitals. Death has been institutionalized (81% death in hospitals), and only 3% of death was served by HPC in 2015. Another big social issue in geriatrics is poverty, especially with the high growth household expenditure before death.

HPC was first introduced in Korea in 1965 in Mary’s Calvary Clinic. The Ministry of Health and Welfare started fostering HPC programs in 2003, and in 2009, the National Health insurance started a pilot project for case payment of palliative care unit (PCU). Since then other payment programs were introduced under the Cancer Control Act in 2011 to include inpatient HPC, home hospice, and convalescent hospice. As a result, Korea’s world ranking for end-of-life care has improved from 32nd in 2010 to 18th in 2015. Among HPC health care professionals, nurses received the most training, which includes advanced and specialized HPC training. In contrast, most physicians and social workers have only basic level HPC training.

In 2016, Hospice & Palliative Care and Self-Determination Life Sustain Treatment Act was passed to expand HPC from only cancer patients to all patients with terminal illnesses and to allow long-term care for HPC patients. Since the implementation of the social insurance in 2008 and the act in 2016, long-term and HPC in convalescent hospitals have dramatically expanded by 7 times in   Korea. These convalescent hospitals admitted about 230,000 patients in 2015 alone. The benefits of this expansion are easy accessibility, efficient use of medical resources, and cost effectiveness of convalescent hospitals.

However, there are also a few concerns, including patients’ anxiety, lack of educated staff, and quality control. Many patients prefer famous hospitals in big cities to convalescent hospitals in communities. The families are afraid and think of convalescent hospitals as a modern version of Goryeojang, a place for sick people left to die. Also, only 20.9% of convalescent hospital staffs have received appropriate education. For example, research shows that 50% of nurses hesitate to give pain medication and 80% of them administer placebo to patients that complain about pain often. Additionally, there has been a dramatic increase in opioid use in acute care setting since 2008. These are all important issues that require attention and education.

In order to address these concerns, public health policy approaches for HPC in convalescent hospitals are needed at various levels. Level 1 includes palliative care approach from all staff and community. Level 2 is advanced general palliative care by additional HPC training and expertise. Level 3 is specialist palliative care in PCU and home hospice. It is unclear where convalescent hospitals fall in these approaches, but the Korean government is currently planning new models with pilot studies for this issue, and results may be published at the end of this year.

For cultural considerations, Kwon’s research shows that the Korean value of “not burdening others” is the most important factor of death with dignity over “free of pain” or “being at home.” Other cultural considerations in geriatric palliative care include filial duty, lack of patient involvement in decision-making, and the taboo against death. Family members feel guilty and not filial for institutionalizing their parents. Ironically, there are no caregivers available at home, and only 21.7% of patients are fully involved in decision-making. Patients and their families often lack and fear experience with death and dying.

Lastly, Kwon pointed out the urgent tasks to ensure quality HPC in convalescent hospitals in Korea. Education and training for staff are needed as well as construction of culturally sensitive standards and guidelines, organizational policy and regulation, integration of HPC into long-term care insurance system, and strategies for quality control. 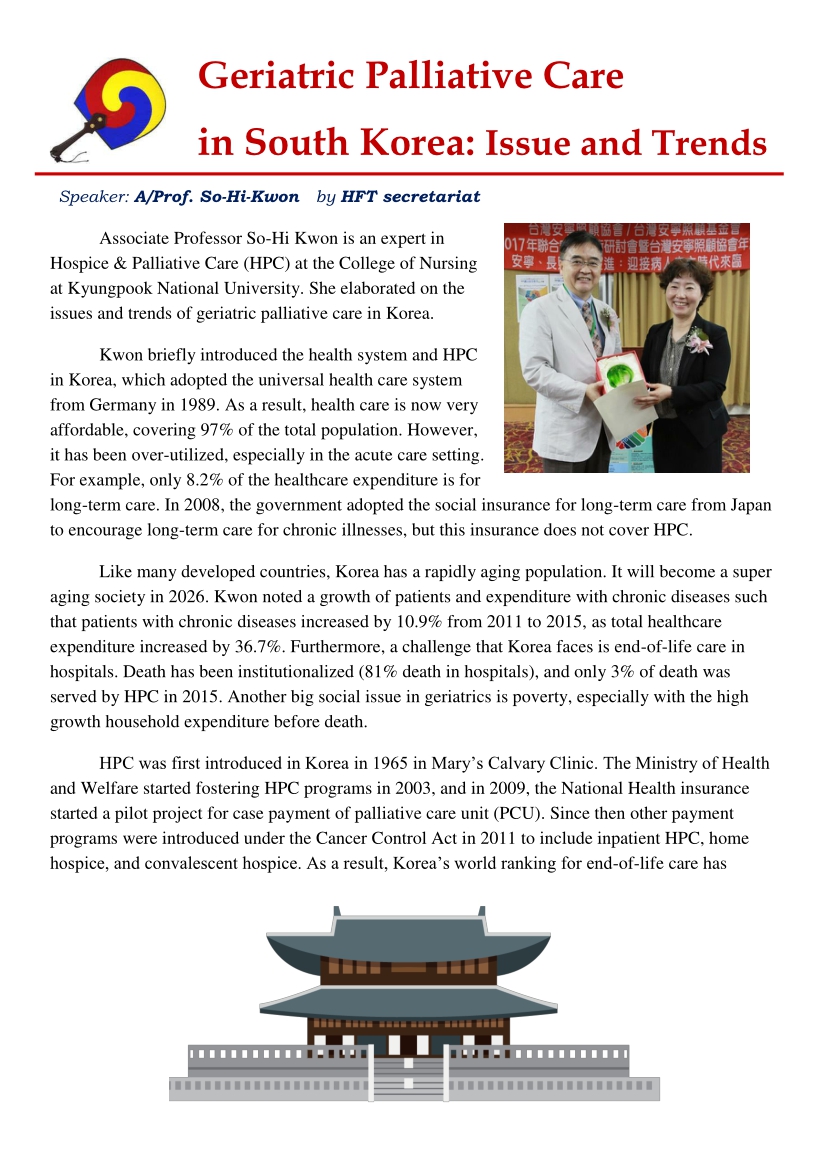 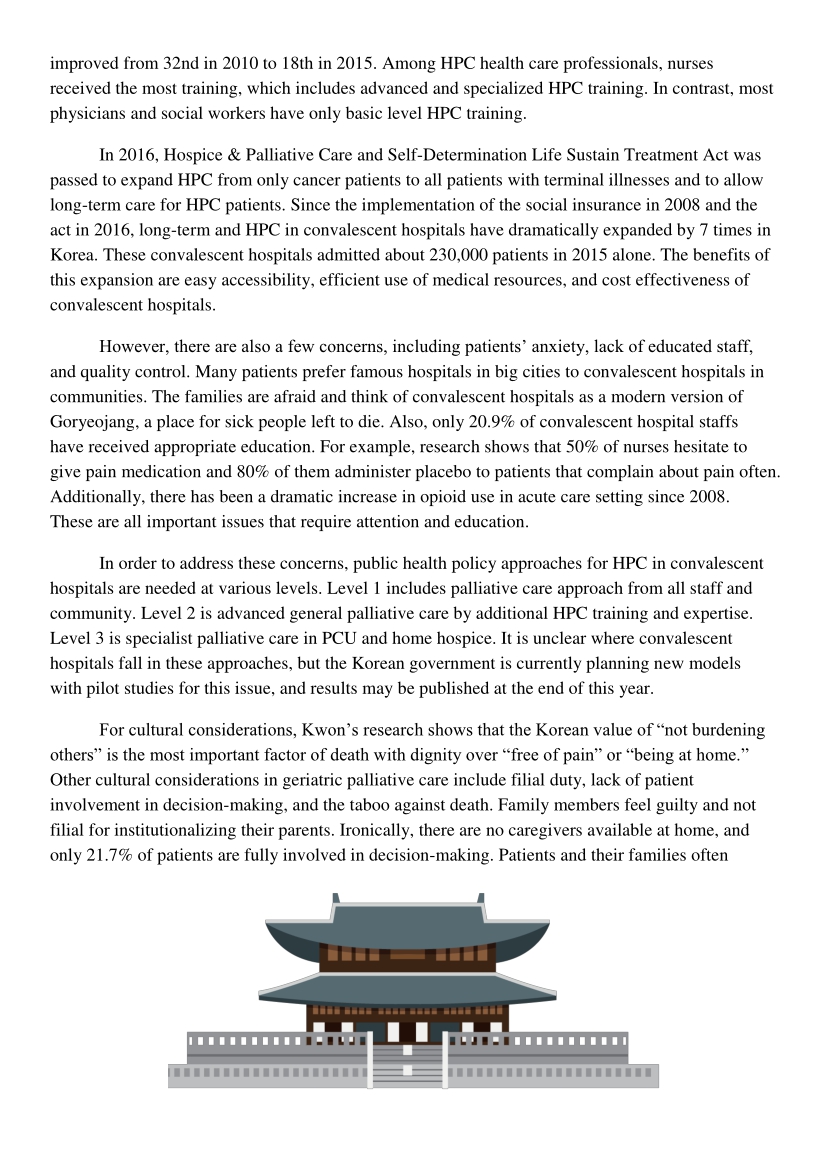