作者:
HFT Secretariat (Based on Dr. Jeanno Park's presentation in the 2018 International Conference on Palliative Care in Long-term Care Settings - Integration of Palliative and Long-term Care.)

Dr. Jeanno Park is the Director General of Bobath Memorial Hospital and was the Director of the Insurance Department (2006-2016) and Auditor since 2014 in the Korean Society for Hospice and Palliative Care (“KSHPC”).

The Ministry of Health and Welfare of Korea (“MHWK”) had officially allowed public insurance coverage for the KSHPC administration type in July 2015 and started a test-run program in geriatric hospitals in September 2016. In 2018, there were 81 hospitals providing palliative care with a total of 1,346 beds available, 25 home visit units, 20 consulting services, and 16 geriatric hospitals. The KSHPC usage rate is expected to increase 20% until 2020, while the number of KSHPC beds occupied is expected to increase from 1,318 beds in

To understand the development of palliative care in Korea, one needs to look at its legislative branch of government. In 2002, the Korean government established the HPC as part of a comprehensive plan to work with geriatric diseases, and passed the Cancer Control Act in 2003. It also started to support hospice care designated institutions in 2008, and included terminal cancer patients under the public insurance service coverage in 2015. In 2016, the Korean government passed the Hospice and Palliative Act and Decisions of Life-sustaining Treatment for Patients at the End-of-Life and expanded from only cancer patients to include patients who had AIDS, chronic obstructive respiratory diseases, chronic liver cirrhosis, and any other diseases prescribed by the Ordinance of the Ministry of Health and Welfare.

According to a statistics report published by the Korean government, geriatric hospitals have also increased during the last 7 years from 867 in 2000 to 1,529 in 2017.

The Geriatric Hospital Test-run Program lasted from September 2016 to January 2018. The purpose of this test-run program is to (1) increase KSHPC institutions and beds; (2) check compatibility of KSHPC in geriatric hospitals; (3) extend extra-large general hospitals and general hospitals to hospitals and clinics; and (4) distribute city-centered services network more evenly. It is important to note that the insurance cost for this program is the same as the KSHPC administration type.

Community based care service is still developing in 2018, and thus details are still unavailable to include in this article. However, it is important to note that palliative care is being included in the community based care as emphasized by the Korean Hospice and Palliative Care Association. Geriatric hospital based care has been developed over the past 20 years, but it still lacks a proper communication structure. For example, there is a general physicians’ lack of interest to be involved with community based care and also the tendency for palliative physicians to not share key information with patients and communicate with the palliative team. These are just a few of the communication barriers to overcome.

The Korean government is considering community based care to constantly provide for non-cancer patients in the future, and for hospital based care to be provided for cancer patients under the test-run program. Though many administrators are inclined to offer end-of-life rather than palliative care in the hospitals, these barriers will need to be overcome as soon as possible in order to provide palliative care with easier access especially in the super-aging society in Korea. 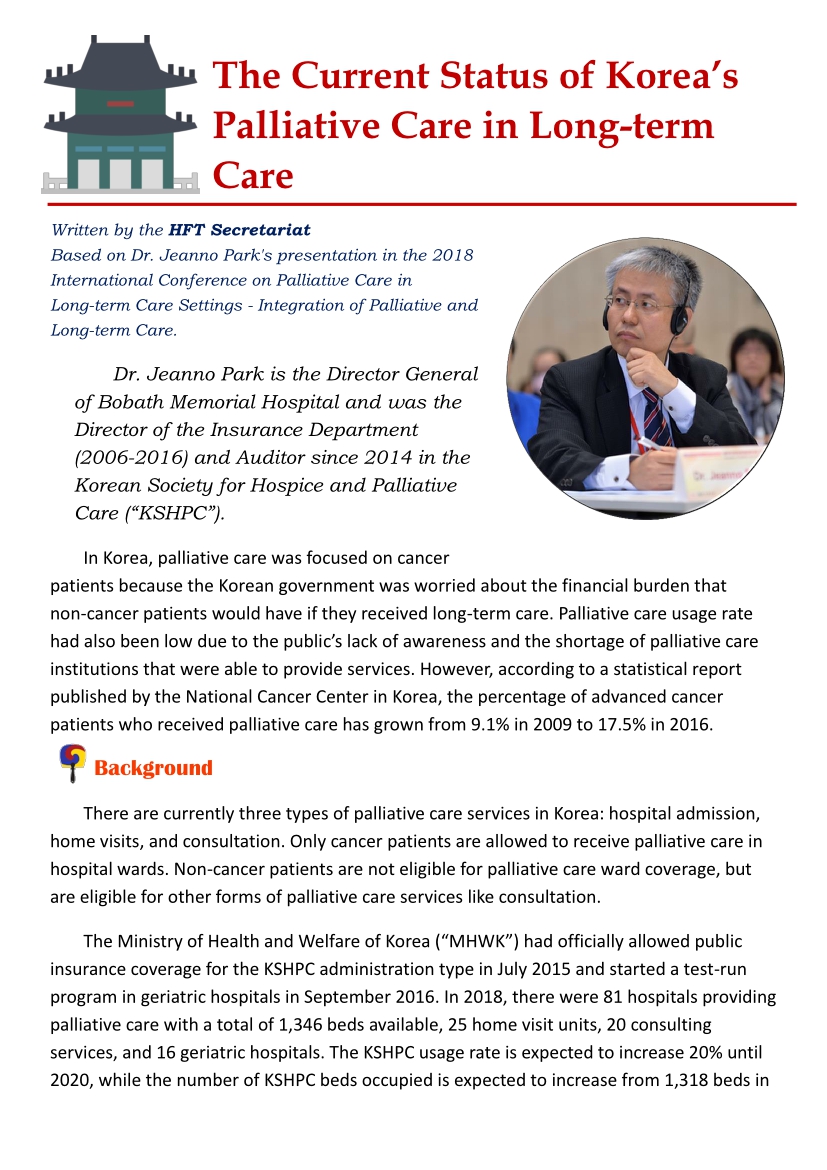 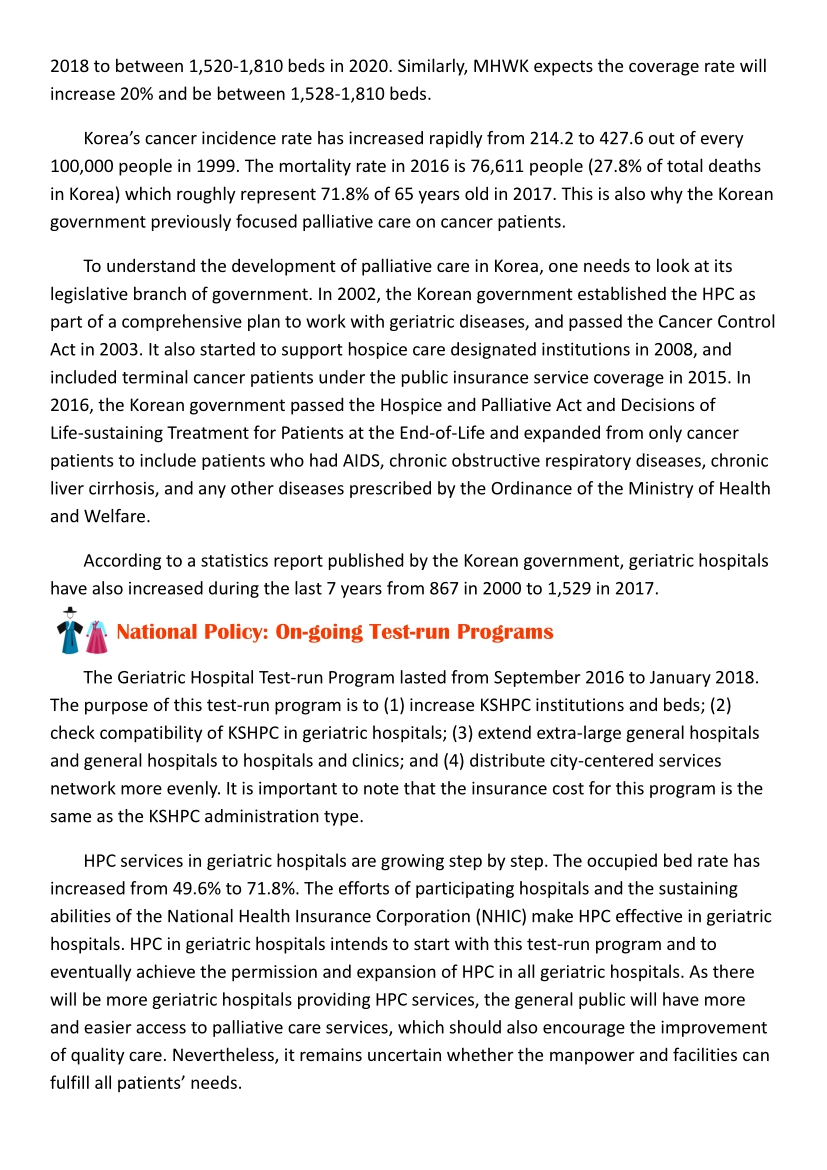 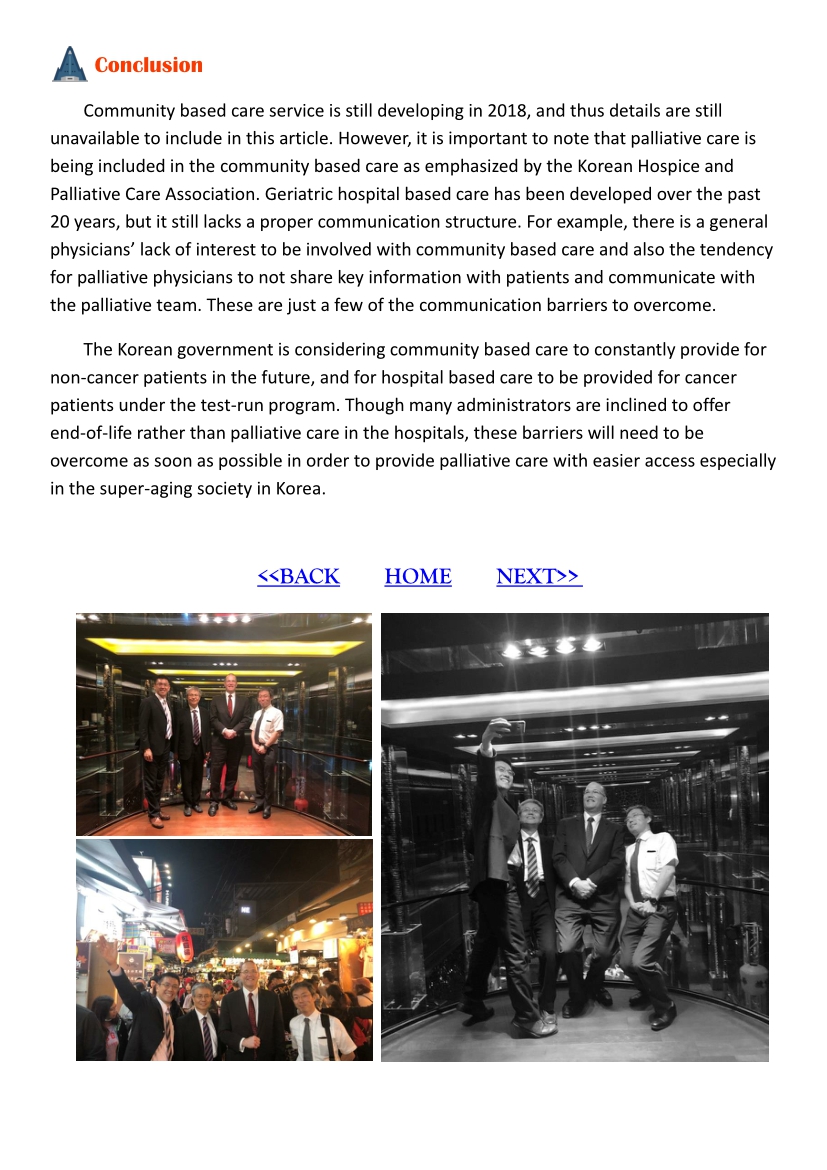