Palliative care is an important topic, especially as caregivers are consumed in all aspects of their physical, mental, social and spiritual energy when caring for others. Nevertheless, if they know how to make good use of resources and constantly remind themselves to take care of themselves, they will have enough support throughout the times of their dedication and commitment in palliative care.

Be it the end-of-life care or the long-term care process, palliative care is definitely an extended war of attrition. For family caregivers, patience, will, and emotion may wear away bit by bit in the process of giving care. For professional caregivers, the struggles of burnout, stress, and the burden of life and death also increase over time.

Regarding the various pressures on caregivers, the government and the public have gradually improved the relevant support systems. Through the process of seeing and discovering how and when caregivers face severe challenges in physical, mental, social and spiritual aspects, they hope to reduce the sense of powerlessness as caregivers had experienced before.

Accepting the Responsibility of Palliative Care, including the Physical, Mental, Social, and Spiritual Challenges

"No one is born to be a caregiver," says Guo Ci-An, Chairman of Taiwan Association of Family Caregivers. She pointed out that family caregivers are often caught off guard and hesitate in having to provide care. At the same time, she also notes that everyone is likely to suddenly take the role of the helpless caregiver one day; it seems inevitable.

According to the observations of the Ministry of Health and Welfare’s Department of Long-term Care, with the changes in the course of the disease and the degree of dependence of the care recipients, the six dimensions of pressure that family caregivers face will also add up, including: (1) psychological burdens such as fatigue, anxiety, and helplessness; (2) career burdens from the difficulty to balance work and life; (3) social burdens of increasingly distant interpersonal relations; (4) economic burdens such as medical expenses and income issues; and the (5) family burden from the possible disagreements among family members.

In 2007, a survey report published by the Taiwan Association of Family Caregivers (commissioned by the Department of Health) showed that each caregiver devoted an average of 9.9 years and up to 13.6 hours a day. Such a heavy and stressful life made 20% of family caregivers suffer from depression, with another 65% prone to depression, 87% suffering chronic mental fatigue, and a higher mortality rate of 60% than that of non-family caregivers.

This shocking statistic concerned Guo Ci-An. She believes that as Taiwan has entered a low birthrate and super-aging society in recent years, the current situation of the care scenario must be more demanding than it was 12 years ago.

Other than family members, professional helpers on the front line, such as nurses, social workers, and care attendants, also shoulder the heavy burden of care. Even though they have received professional training, they are also under intense pressure and loss in the day-to-day workplace, which can lead to emotional exhaustion. Cai Pei-Zhen, Chairperson of the Department of Social Policy and Social Work at National Chi Nan University, observes that professional caregivers, who have direct and frequent interactions with patients and their families, tend to face exhaustion under such high pressure and great emotional burden for extended periods of time.

With the Support System, One Is No Longer Alone on the Road of Palliative Care

Predicament and despair seem to gleam dimly and unpleasantly in front of caregivers, but they are not left behind in the social care system.

"Taiwan Association of Family Caregivers has entered its 26th year since its establishment. We are the first country in Asia to establish a caring family caregiver organization," Guo Ci-An affirms, noting that Taiwan has listened to the cries of help from caregivers for a long time. In the long-term care plan, the government is also releasing sufficient and diverse care resources for caregivers. Additionally, there is increasing support from the public. The Long-Term Care Services Act, which was established in 2015, explicitly includes family caregivers as its service targets.

Yang Ya-Lan, a special commissioner of the Department of Long-Term Care of the Ministry of Health and Welfare, further explained that for family caregivers, the government provides support services such as fixed-point and home-based care, provision and referral of relevant information, long-term care knowledge and skills training, respite care service, emotional support and the referral of group services, as well as other services that help improve the capacity and quality of life for family caregivers.

On the other hand, according to the estimates of the National Development Council, Taiwan will enter a super-aged society in 2025, and the latest data from the Directorate General of Budget, Accounting, and Statistics also show that there may be more than 13 disabled elderly people out of every 100 elderly people. In the face of this irreversible trend, the deployment of care resources must be rapid and universal. Therefore, in addition to the long-term care 2.0 service, the Department of Long-term Care has also subsidized local governments to establish family caregiver support service centers in their counties and cities. The number of these service centers grew from a mere 29 in 2017 to 114 by 2021. 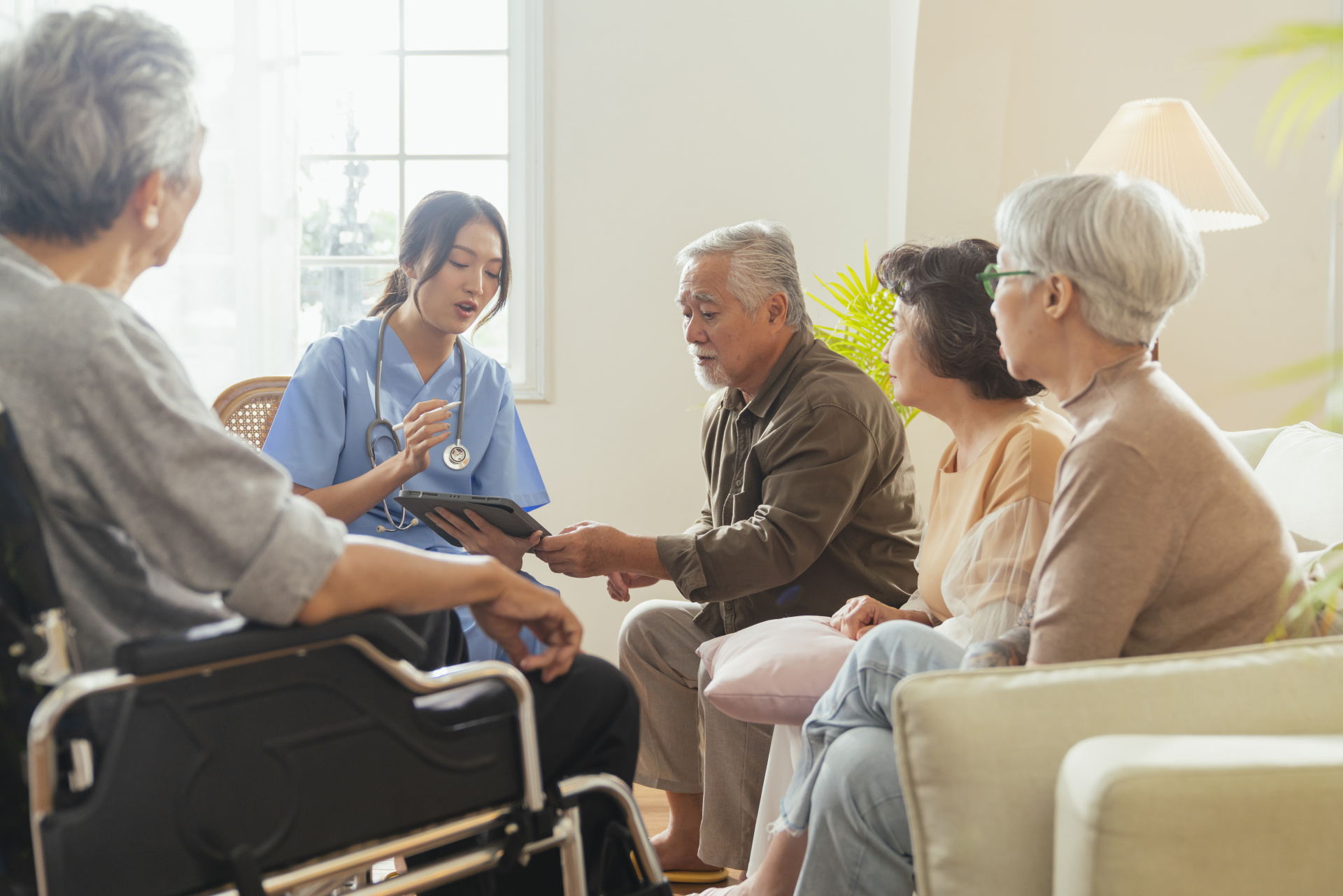 "After the passage of the 2015 Act, resources have emerged and gradually improved," says Guo CiAn, a member of the Long-term Care Promotion Subcommittee of Executive Yuan. He believes that there is still a lot of room for improvement and reinforcement in order to complete the social support resources. Compared to other countries, Taiwan's care for caregivers has already taken the lead. He points out, "There are few countries in the world that can provide so many services. Even European countries with relatively sound welfare systems find it difficult to achieve."

Guo Ci-An is also pleased to say that not only has the government passed laws to promote such services, but also the private organizations have offered relevant courses, provided psychological support, and set up support groups. Guo CiAn assures, “If caregivers can make good use of these resources, they will be empowered to move on."

For family caregivers or professional helpers, self-care must be the key in order to maintain the energy needed for long-lasting care.

A social worker who has worked in a hospital for 10 years, Cai Pei-Zhen has also experienced the deep exhaustion of these long-term caregivers. She emotionally expresses that caregivers must consciously take care of themselves every day, advising, "If you want to stay on the path of continuous care that is lively, happy, and powerful, the first and foremost objective is to take good care of yourself.”

In clinical practice for many years, Cai Pei-Zhen realized that palliative care tests one's sense of responsibility and ability to love. With love as the base, one can be more actively engaged. She observes, “The problem is that those who have burned out are also the people who loved the most. The result of neglecting self-care is that many caregivers suffer from health problems and depression of their own.”

With the impact of family structure changes, Cai Pei-Zhen laments that the responsibility of palliative care in most modern families is on just one family member, either because of employment challenges or because the caregiver is sympathetic to other family members. However, with the lengthening of time and changes in the condition of the illness, it is not only likely that the caregiver becomes caught in the predicament of physical and mental exhaustion, but other family members may have difficulty to prepare for the eventual farewell of the patient.

"We have seen in the clinic that when many dying patients finally leave, only the caregiver is psychologically prepared with the departure, while other relatives and friends are not," observes Cai Pei-Zhen. She adds with sincerity, "Getting everyone involved in the caregiving process is conducive for everyone to better deal with separation anxiety and anticipatory grief. Furthermore, it helps reduce future grief related to self-blame for not having participated in the palliative care.”

Effective Use of Resources Provides the Necessary Rest for Caregivers

What Cai Pei-Zhen felt is often seen by Guo Ci-An at the service center. A woman who had been taking care of her parents for 30 years told her that during the care process, she collapsed more than once to the point that she wanted to slam her head into a wall and die.

"There are quite a few caregivers like her," states Guo Ci-An, who can’t help but plead with all her heart that rather than be a super caregiver, one needs to make the best use of resources and arrange his or her own time. She urges, "Only if I myself don’t collapse will the one I am taking care of not fall.”

Someone once questioned this, asking "Are you disregarding the values of filial piety by saying this?"

Faced with such a confrontation, Guo Ci-An felt helpless, but remained calm to explain, "With the physical strength renewed by making good use of resources, caregivers can enjoy the simple yet important things in life, such as savoring a cup of tea, watching a movie, and facing life at ease for a few precious moments. Otherwise, when caregivers are constantly busy giving themselves to others, how can they be expected to have the strength to even smile again to the person they are caring for?"

She believes that when the caregivers are immersed in emotional turmoil, they will also drag the care recipients into the valley, saying, "They will feel that they have contributed nothing and are dragging others down. Many patients even feel that it is better to die as soon as possible in order to free everyone else from the burden of caregiving."

Over the years, she has even seen many caregivers who are alone on the road of palliative care. They endure until they are not only exhausted, but also, the relationships with their family become tense. Eventually, they surrender, but the broken relationships within their family are difficult to mend as they face the predicament of loneliness in old age.

Therefore, whether as a family or professional caregiver, only by realizing and being aware of the importance of self-care, and making good use of the support resources provided by the central and local governments, will one be able to walk unwavering and successfully down the road of palliative care.