In recognition of World Hospice Day, this year's Hospice Foundation of Taiwan's event Hospice Film and Book Fair was held in Taipei Main Station’s lobby. While people were invited to watch relaxing and witty films, they were also inspired to reconsider and ponder on the topic of death. These films helped remind them of precious family values and the meaning of life. 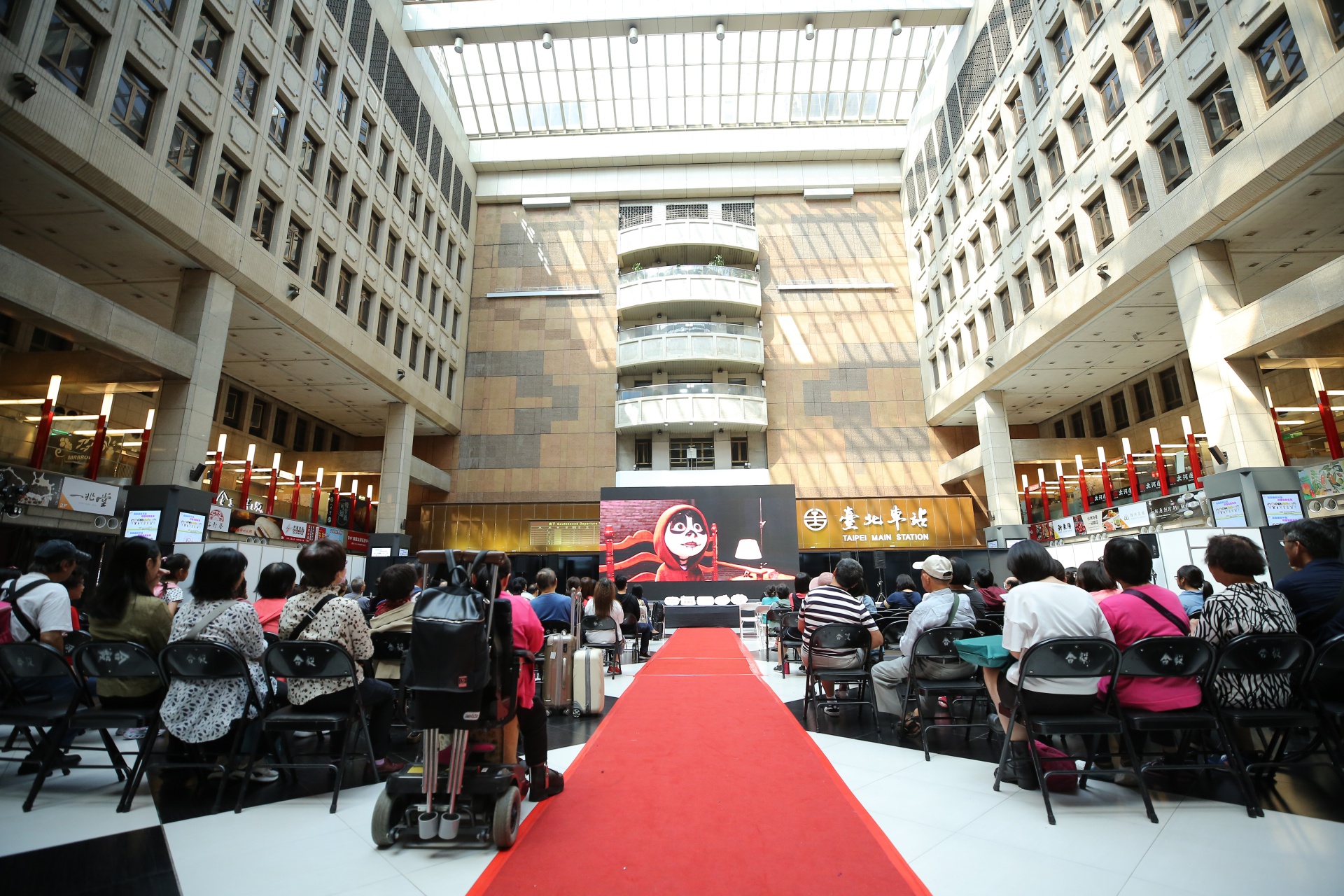 Videography is one of the easiest and most effective tools to convey information for the public. As such, Hospice Film and Book Fair carefully selected two films related to the subject of life and death in an attempt to arouse people's reflection on their own lives.

Prof. Wang Yawei, an assistant professor at the National Chengchi University’s College of Communication and curator of the Hospice Film and Book Fair this year, intentionally selected the films Coco and The Human Condition – Part 1 (the Abridged Edition), which are both lighthearted and interesting. These easy to understand video masterpieces lead the public to rethink the important issue of life and death from different angles.

Overcoming Environmental Obstacles and Creating a Spiritual Space for All People

“I chose Taipei Main Station for the film fair because of its numerous passersby who are comprised of different groups,” says Prof. Wang Yawei. “I believe this open and interactive way to let people approach the issues of life and death is more attractive than lectures or articles.”

However, there are many challenges with playing films in such a large public place. For instance, the appropriate equipment must be chosen to play films in such a well-lit place. Then there's endless background voice interruptions such as railroad station announcements, people's conversations, and commercial activities in the surrounding stores. In order to reduce all kinds of interference and allow the participants to enjoy the best viewing experience, the equipment was carefully deliberated and finalized after several meetings and discussions. The Hospice Foundation of Taiwan also arranged a number of volunteers to promote the activities and guide the visitors on the day of the event so that more people could enjoy the films.

Contrasting the serious, sad, and taboo attitude of the Taiwanese people when facing death, this year's film fair included the lighthearted singing and dancing animation film Coco and the humorous The Human Condition – Part 1 (the Abridged Edition). The two films depicted different attitudes on life and death in distinct cultures providing the audiences the opportunity to ponder over the different views on hospice care.

Prof. Wang Yawei expressed that although the two films selected in this year's film fair came from very different cultures, they have one thing in common: the protagonist in each film resolves one’s internal ambiguity and obsession, and in the process, breaks the boundary between the human world and the afterlife to pursue the meaning of life. Through these films, the Hospice Foundation of Taiwan hopes to guide everyone into thinking about death as a borderless experience common to all, and start pondering about the relationship between the “Four Principles of Life" (give thanks, make amends, express love, and say goodbye) and dying a good death.

The film fair kicked off with Coco, a film produced by Pixar Animation Studios and won the Academy Award for Best Animated Feature Film. Rich and bright colors and artistic designs were used in Coco to indicate the strong sense of Mexican culture on its traditional Day of the Dead. In contrast to the expected sadness that Taiwanese people associate with death and parting, the Hospice Foundation of Taiwan wished to use the storyline based on Mexican traditional culture to show that there are other viewpoints when faced with death.
Coco tells the story of a young boy named Miguel who grew up in a family where music is regarded as a taboo; however, he couldn't hold back his dream of music and, by fate, entered the world of the undead.

In his continuous quest for his dream and fame, he embarks on a long journey searching for his ultimate hero, Héctor, his great-great-grandfather. In the end, he finally realizes that the true meaning of having existed is not in one's fame or fortune in life, but lies in the love and memory from the living family members. That is, the value of a person’s life is determined by what his or her living family members remember. When Miguel pleaded to his great-great-grandmother Imelda for his great-great-grandfather Héctor, he says, "You don't have to forgive him, but we shouldn’t forget him." This also emphasizes the importance of reconciliation, and when faced with the uncertainties in life, one must not miss the opportunities to give thanks, make amends, express love, and say goodbye. 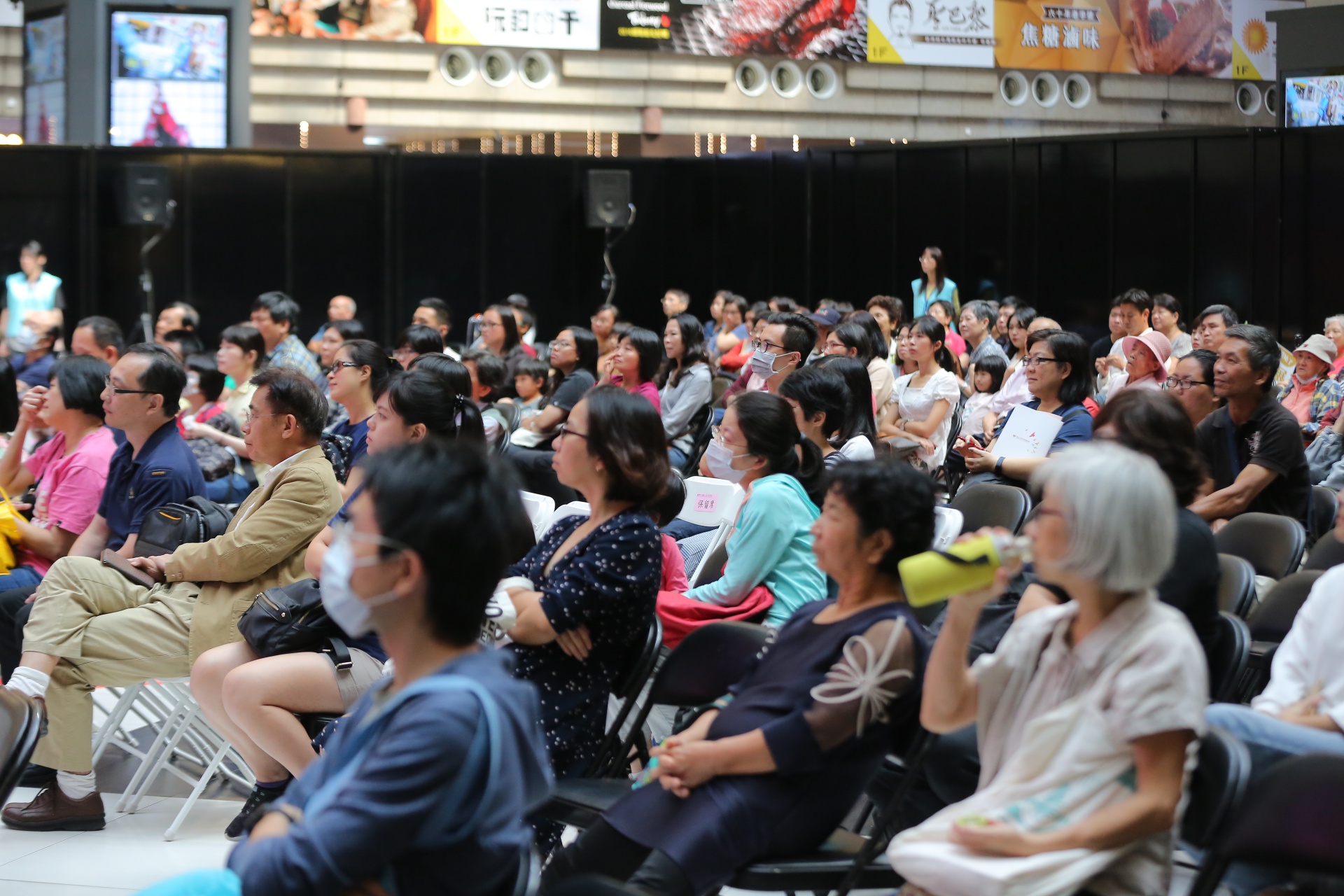 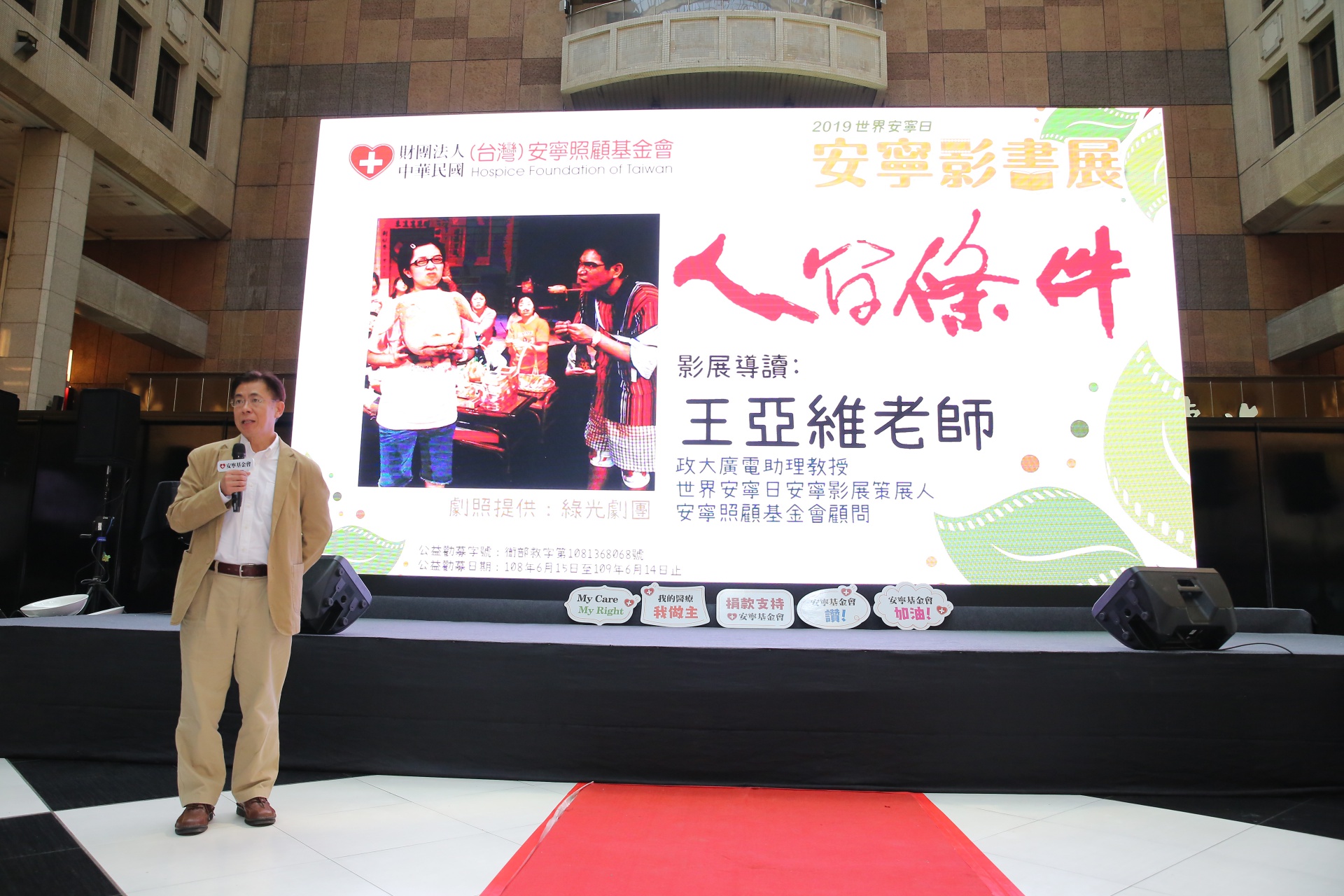 The second film at this year's film festival is The Human Condition – Part 1 (the Abridged Edition) provided by Greenray Theatre Company. Prof. Wang Yawei says he chose this play not only because Director Wu Nianzhen is the spokesperson of the Hospice Foundation in Taiwan, but also because of the unique connection between plays and people. People like to watch plays because it is like witnessing the epitome of others' lives, which may also reflect the life experiences of the viewers. In addition, a play's storytelling style often provides a safe distance for the audience, making it more touching and shocking, and thus, causing more resonance in the mind of the audiences. Therefore, a play can be said to be a strong yet gentle form of media.

The Human Condition – Part 1 (the Abridged Edition), the first play that Dir. Wu Nianzhen has ever written and directed, describes a grandmother who had died for many years, but is able to cross the border from death to life as she returns to the world of the living. Her granddaughter Amei is possessed by the spirit of the grandmother, and the play then develops into a series of hilarious plots with her loved ones. The reason why the grandmother in Dir. Wu Nianzhen's story returns to the world of the living is to finish an unfulfilled wish in her life, which is to give thanks and blessings to her long time caregiver. Prof. Wang Yawei believes that this play faithfully describes the social phenomenon Dir. Wu Nianzhen observed, that is, Taiwanese culture is often restrained and implicit where most people are not accustomed to expressing emotions, and as a result, would bring their gratitude or grievances to their graves. The Hospice Foundation of Taiwan hopes that through the humorous plot of The Human Condition – Part 1 (the Abridged Edition) on World Hospice and Palliative Care Day, people will see these serious and important issues in a more relaxed atmosphere.

My Treatments, My Decisions; Deepened Learning with Interactive Lectures

Although Taiwan's hospitals are very reputable at helping patients achieve the concept of “dying well, talking about death itself remains a serious taboo in Taiwanese traditional culture. Besides showing films at the international World Hospice and Palliative Care Day event in order for people to have a deepened understanding of hospice care as it relates to our daily lives, has also the Patient Autonomy Rights Act. The Hospice Foundation of Taiwan invited TEDxTaipei lecturer, Dr. Zhu Weimin from Taichung Veterans General Hospital to give an interactive lecture right after the showing of Coco. Heightened by strong impressions from the movie, the audiences seemed to effectively embrace the seeds of the hospice care concept; these seeds will eventually sprout and help them in their own future dying well planning.

The celebrity lecture in the afternoon attracted even more people because the Hospice Care Foundation of Taiwan invited its spokesperson - known to be "the best storytelling figure in Taiwan" - Director Wu Nianzhen, to talk about how he had created The Human Condition – Part 1 (the Abridged Edition) nineteen years ago. Prof. Wang Yawei said, “Through these nineteen years, Dir. Wu has gained more insight through the ever-changing time and circumstances, especially when he had a serious illness several years back, which gave him a different point of view and opinion on the subject of death.” Therefore, Dir. Wu Nianzhen was again invited to "tell a story" this year. His speech stirred up the audiences with various perspectives on life.

In addition to the film fair that day, a "Hospice Book Exhibition Area" was showcased next to the film site. In response to the international significance of the World Hospice and Palliative Care Day, more than 80 domestic and international hospice care-related books and children's picture books were exhibited. The hope is for the public to be touched by their participation in this international event, and to recognize that hospice care has become a global trend and common issue for all. Furthermore, there was a "Charity Bazaar" to allow people who support hospice care to take more active roles.

On weekends and holidays, locals and tourists of different backgrounds travel through the lobby of Taipei Main Station. They come and go, or sometimes stop briefly. Prof. Wang Yawei said frankly, “It is almost impossible to let passersby learn about hospice and palliative care in such a short time. However, as long as people can see the existence of hospice care, even if it’s just a glance, it can draw people’s attention and conversation towards the issue of life, including communication and reconciliation with family members. This would be the biggest achievement of the Hospice Film and Book Fair.”