A colorful feather surrounded by a description of “Hospice Volunteers in Taiwan” was the simple yet impressive logo shown in the 2015 APHC venue. This logo represents the invisible, serene power brought by the Taiwanese hospice volunteers 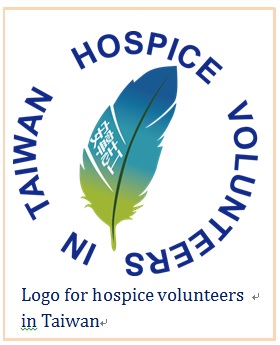 "The shape of the feather represents Taiwan. The feather itself represents the medical palliative team, and we, the volunteers, are there to fill the unfilled corners of the feather, just as we do to fill in the manpower shortage to complete it as a team. The feather can be as light as a goose feather, just as hospice volunteers scatter in various hospitals; it can also cause mighty gravity when all the volunteers are striving for a common goal and serve the terminally ill patients. Furthermore, these feathers can turn into the wings of an angel. The purpose of this conference is to demonstrate the strength the feathers can generate and the angelic hearts of the contributing volunteers”.

A simple logo yet carries such abundant meaning. This shows not only the essence of hospice volunteers, but also the role played by the volunteers who participated in the 2015 APHC.

By the invitation of the Hospice Foundation of Taiwan and the encouragement of Ching-shiu, Feng-ying happily took part of 2015 APHC. All the volunteers who participated were from Mackay Memorial Hospital, National Taiwan University Hospital, Cardinal Tien Hospital, Taichung Veteran General Hospital, Lotus Foundation, Catholic Sanipax Foundation and more. They worked side by side as they had already known each other for some time. All they wanted was to share their 20 years of experience with visitors from abroad. In these four days, the 2015 APHC re-strengthened the reasons why Feng-ying chose to devote herself to hospice volunteering service and many others.

What impressed Feng-ying the most were the balloon doctor and nurse standing in the venue hall to greet participants. After she looked around, there were many balloons transformed into butterflies, hearts, flowers and so many different things. This really lit up the venue and brought a lively atmosphere. After Feng-ying’s further inquiry, all these delicate artworks were from the hands of a group of volunteers led by Lin-ju. These balloons in their various styles showed the vigorous and vibrant side of the volunteers.

All the volunteers were separated into groups such as onsite assistance/ guidance, aromatherapy, sand wishing bottles, storytelling, balloons and book stands. Besides showing eagerness to serve and their friendly smiles, volunteers also provided the same high level of professional service to visitors as is normally provided to patients.

She recalled the volunteers onsite prepared many colored salts to invite everyone in making their own wishing bottles. As a final touch, the volunteer tied a ribbon on the bottle to remind visitors of the hope in their hands and smile on their faces.

As for storytelling, this was a must learned skill to help patients stay in palliative ward to relax. Most of us are now well trained by experiences and are able to share the story with lively intonation and body language; this often brings laughter to the wards with joy.

Though there is still a lot to learn about hospice and palliative care, volunteers are still willing to give everything they have. After this brief exchange of experiences with volunteers from other countries, Feng-ying believes this has reaffirmed her determination to carry on her service as hospice volunteer, and assist even more patients with their final days.