作者:
Written by Xi-yi Tu and translated by HFT Secretariat

Though Yu-hsuan Liu has been serving in the hospice ward using music therapy for years, many patients still don’t know how to address her position except as “the singer.” Liu doesn’t mind because she only cares about whether she has helped these patients feel better and become more complete in their last stage of life.

Dive Unexpectedly into the World of Music Therapy

When Liu was 5 or 6 years old, she already played piano and flute competently. With her talent, it was no surprise that she enrolled in a special music class during high school.

Her passion for music was undeniable, and she desired no spotlight on the stage. Not wanting to become an artist or a music teacher, she was confused about what she should do in the future except to continue in the area of her passion for music.

Many children they served were stricken with severe diseases, and though it has been ten years already, she still remembers a child with cerebral palsy who had no intellectual disability, but instead had great difficulty walking. With support of a walking aid orthotic, the child courageously struggled to march out with every little step.

“Children listen to our music or drumbeat to follow the little footprint marks on the floor and stop when the drumbeat stops.” It looks like they are playing a game, but in fact, this is rehabilitation designed to be fun in order to motivate children. Instruments are also situated in the corners of the room, and once children make it to that corner, they are allowed to play the instruments as they like.

“This child improved from 2-3 steps at a time to 3-4 steps, and it took 10 classes for him to finish all the footprint marks in a single attempt.” Liu believes in the value and results that music therapy can bring to children with severe diseases by personally witnessing the improvements of many such children; as a result, her heart is filled with a sense of mission and accomplishment.

With all the times she has spent with her young patients, her career path also emerged. “Compared to those who wish to learn an instrument professionally, I am led to believe that these patients with severe diseases need me more,” Liu said.

Music Is a Bridge, and the Music Therapist Architects that Bridge

Music therapy is still unfamiliar to the general public. When Yu-hsuan Liu completed her music therapy degree in America and returned to Taiwan for employment, she took the initiative to knock on many doors to seek opportunities and even hosted many free lectures to introduce music therapy. After six months of demonstrating the benefits of music therapy as a volunteer, she finally received a job offer from the cancer center of Cheng Kung University Hospital.

There was a couple she met in the cancer center that she still recalls vividly. “The woman who was in her 50’s was sick, and along with her husband, they appeared to be a very reserved and traditional couple with minimal displays of affection.” Liu visited the woman often for chats, and listened to her complaining about her husband. “I really wish my husband could speak lovingly to me more often, even to the degree that will make me feel embarrassed, but he is just not like this,” said the woman.

Hearing the distress, Liu knew she had a mission at hand. It was clear to the outsider that her husband cherished and loved her very much, but his temperament made it difficult to speak words of love. Nevertheless, Liu prepared the lyrics from a famous love song – “The Moon Represents My Heart” – by removing most of the lyrics and inviting him to fill in the blanks with his memories. Eagerly, the husband spent half the day on the task.

When Liu next visited the woman, she asked if she knew what her husband had been doing secretly. Dismayed, she replied, “There is not much he would do.” That was when Liu picked up her guitar and started playing the melody of “The Moon Represents My Heart.” Knowing the husband would be shy, she took the liberty to start singing the song until eventually he joined and sang his personalized lyrics in a whisper as tears flowed down his cheeks. In response, his wife shed tears of great surprise and joy, and intently cherished this moment until the very last tune.

Effective as the song was, there was not a single phrase of “I love you” or any sappy romantic word in his personalized lyrics, which simply included descriptions of the ordinary routines of life. “He praised her cooking, especially a certain dish that he really likes. These bits of memories represent his love and gratification to her,” Liu said happily.

Interestingly, this song also brought the husband closer to their children. As Liu witnessed: “Their children had always thought their father took their mother for granted by not cherishing and caring for her enough. It was not until they heard him sing this song that they realized their father’s subtle but deep affections. If music had not been welcomed into the wards, they might not have experienced this alternative way to express their feelings for each other.” Thus, music therapy can truly ease respiratory symptoms, pains, and also offer invisible psychological support. “Music is like a bridge, which links people’s hearts in an open manner, and the music therapist is the architect of the bridge.”

Caring Not Only for Patients, but also for Families

In the hospice ward, Liu accompanies the families as well as the patients. One time, she saw an 18 year-old girl grasping her mother’s hand tightly for fear of forgetting her mother’s love and presence in the years to come. Her mother was in a coma and breathing her last breaths. Liu then retrieved a sketch pad and made a hand print of the dying mother, so that the daughter could always remember her mother by looking at the hand print.

Another time, Liu accompanied a mother who was about to lose her child, and they recorded a loving song for the child. Later, Liu added something special to the background of the song because “her child was unable to speak in his final days, so I’ve added her child’s heartbeat in the song.”

Dying well for the patients and living well for the families—this is her firm belief. She hopes her music can open the invisible door between patients and their families, and continue to grow in empathy as she comprehends their unspoken needs. Such hopes are being realized as confirmed by a 35 year-old engineer who never interacted with her but spoke with his remaining strength saying, “although I really don’t like to talk, but I really appreciate what you are doing.”

“When people think of the hospice ward, they think of a place for the dying. In the hospice ward, we care for one’s life in many aspects. Though curing one’s disease is no longer the main focus, we emphasize one’s physical, psychological, and spiritual comfort. The entire palliative team—hospital chaplain, music therapist, social worker, psychiatrist, and volunteers—all give the best care they can to patients and their families.”

In a lecture Liu was giving, a student once commented, “The hospice ward must be a very quiet place!” She smiled and corrected the student, “Not at all! In fact, hospice wards can be super chatty!”

Liu is disappointed that although palliative care has made significant progress in Taiwan, there are still many elderly who associate fear with the word hospice. “Sometimes patients pass away quickly when they arrive in the hospice; however, I really want the public to know that palliative and hospice care is not only for patients in their very last moments of life. Instead of viewing the hospice ward as a terminal for a one-way trip, it really is a place for patients to prepare. Palliative and hospice care professionals are devoted, goal oriented, and focused. Just like Liu said, “Our mission is to ensure patients die well and their families continue to live well.” 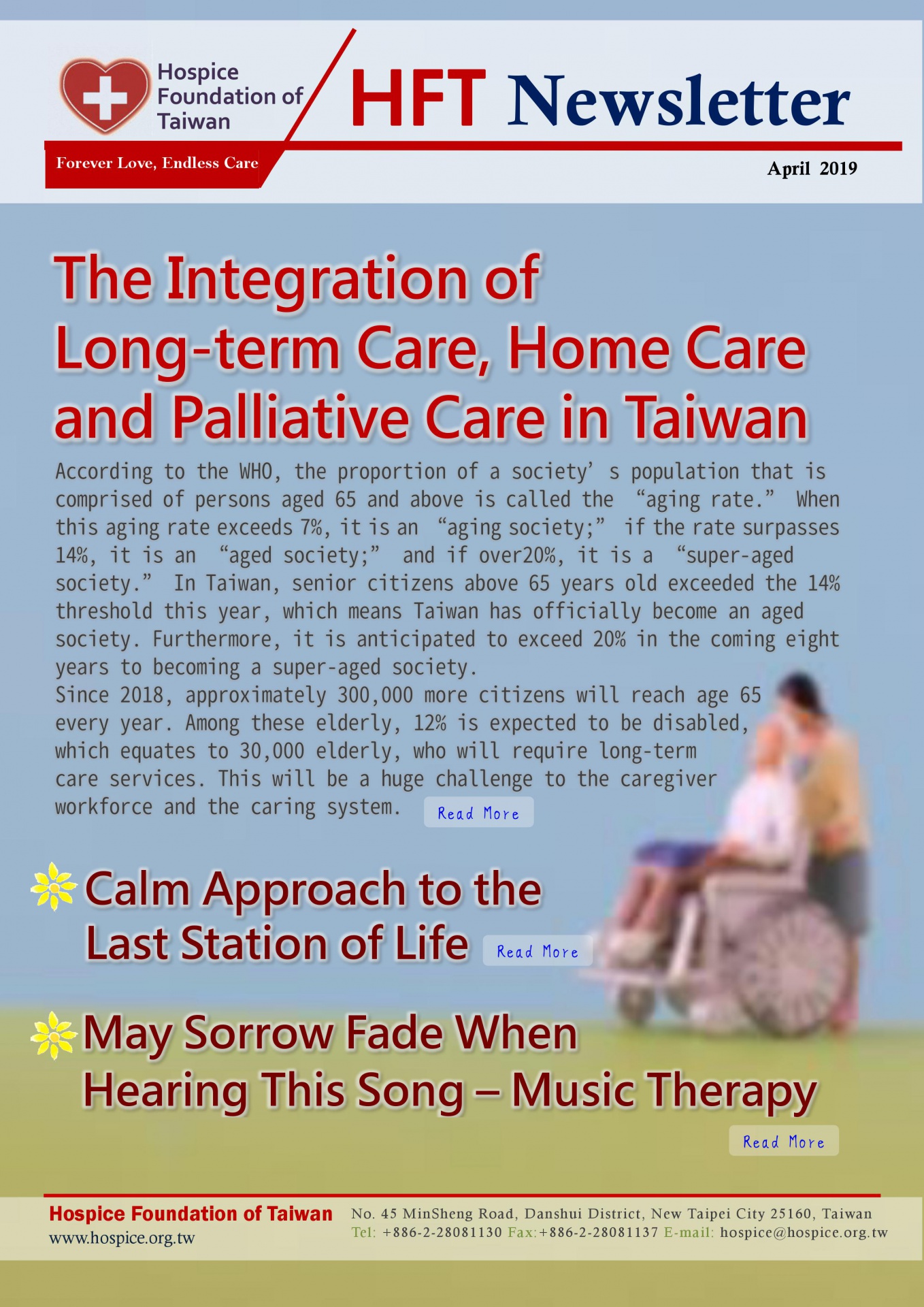 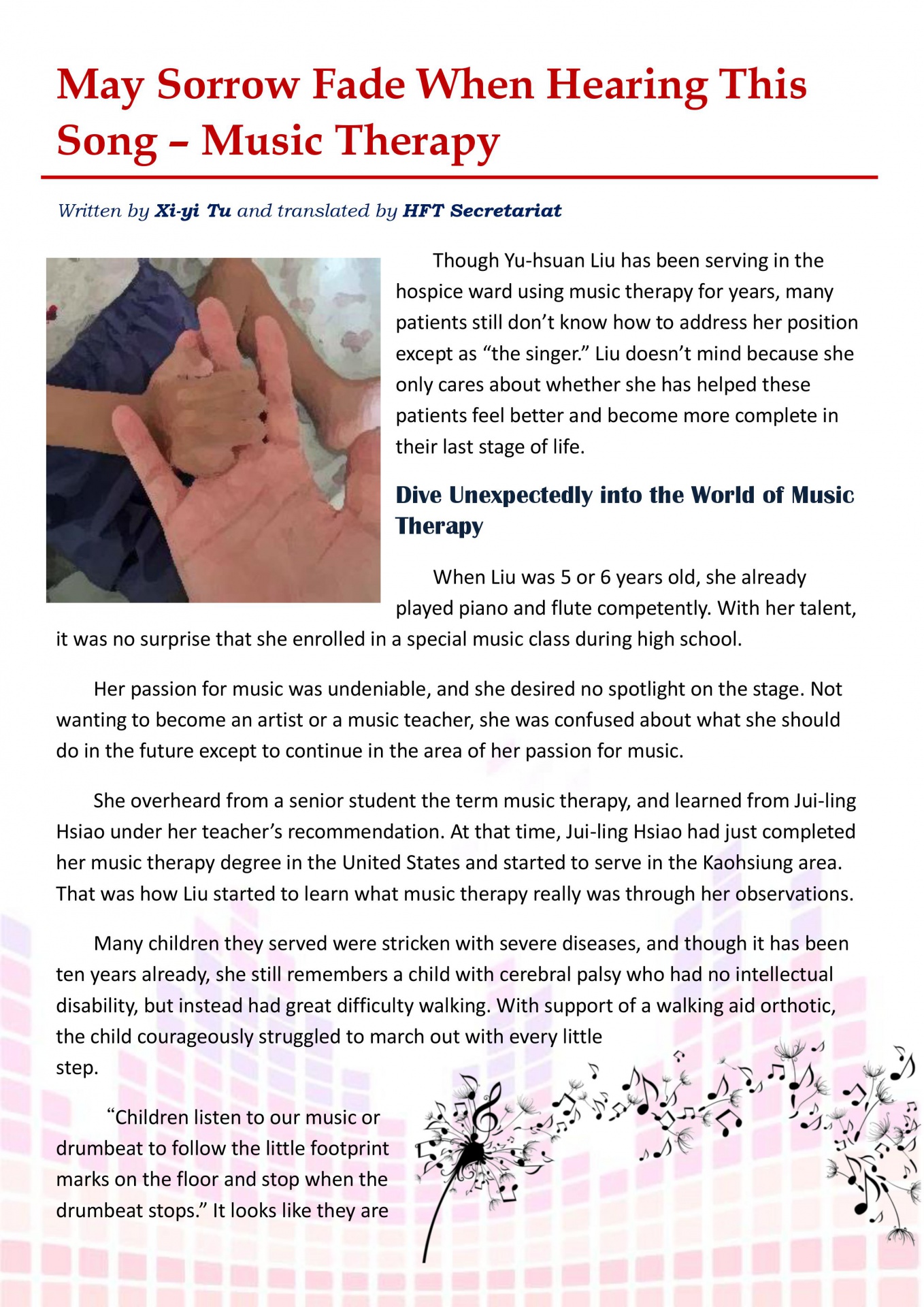 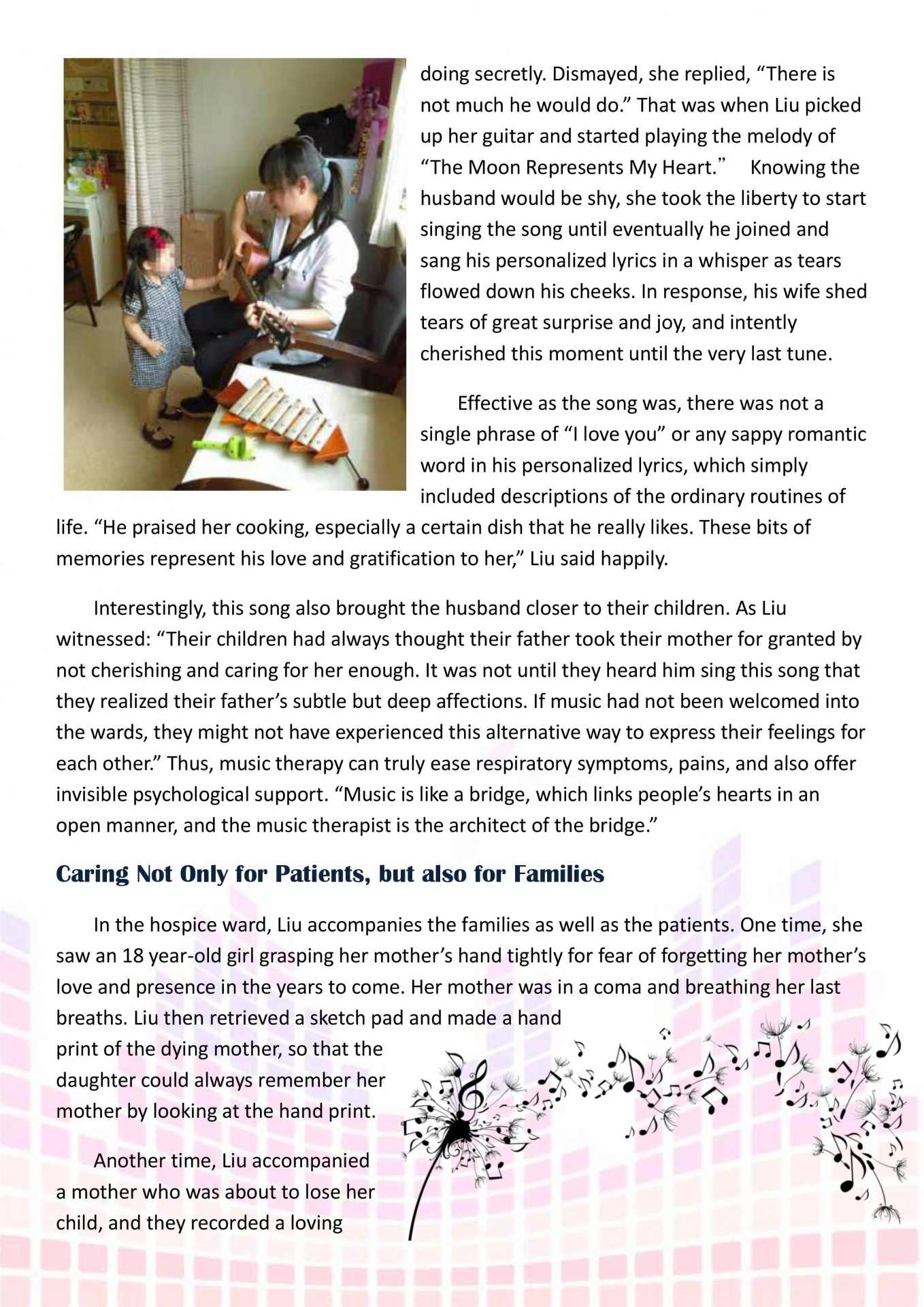 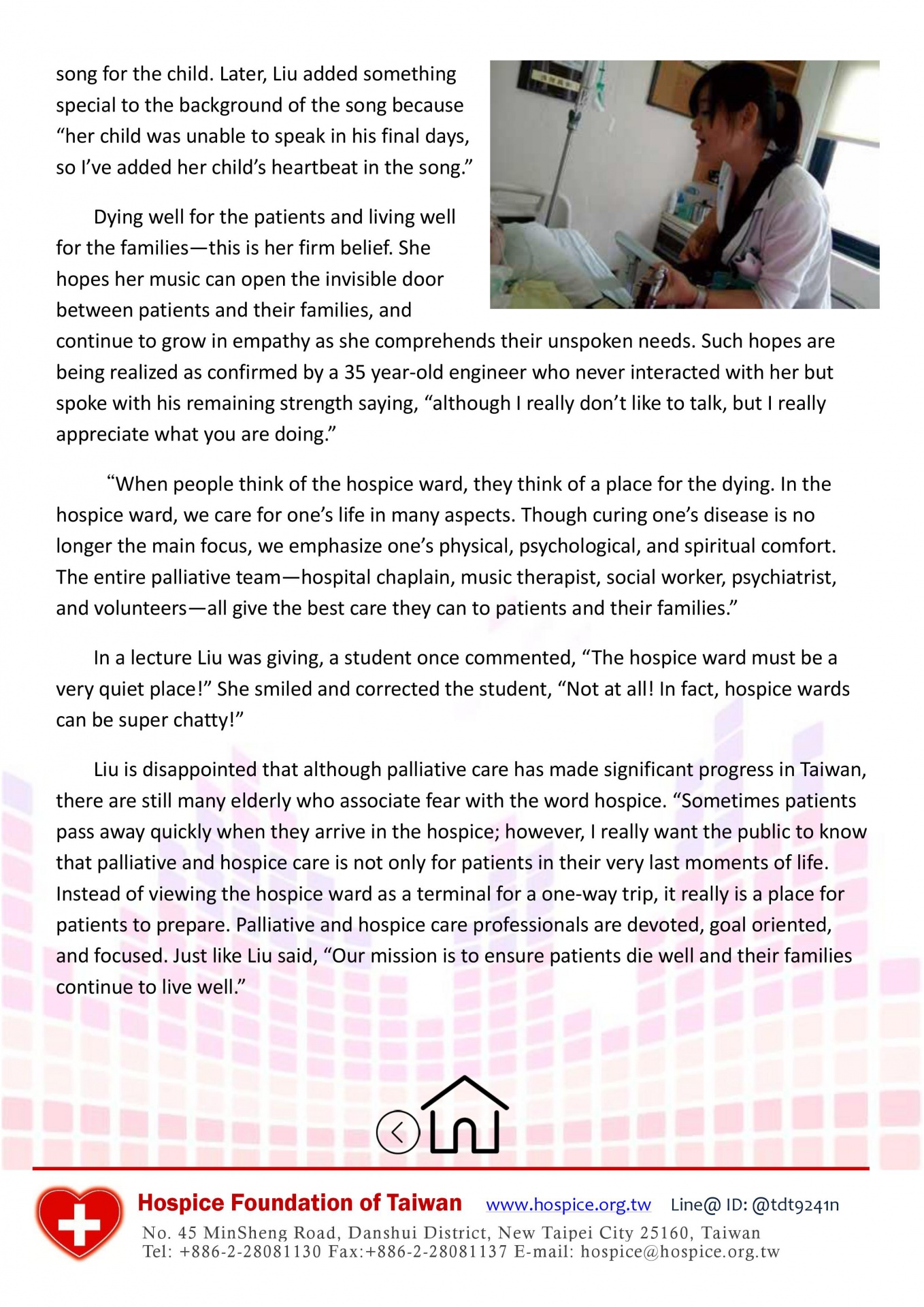